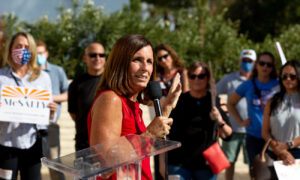 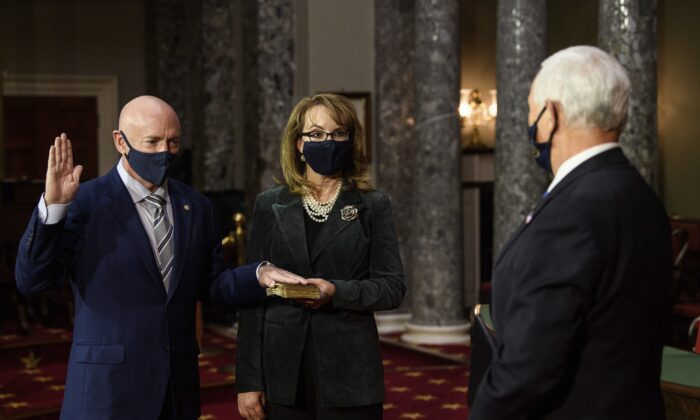 Sen. Mark Kelly, (D-Ariz.), with his wife, former Rep. Gabby Giffords (D-Ariz)., participates in a re-enactment of his swearing-in by Vice President Mike Pence in the Old Senate Chamber on Capitol Hill in Washington on Dec. 2, 2020. (Nicholas Kamm/Pool via AP)
Arizona

Democrat Mark Kelly Sworn in to US Senate After Defeating McSally

Former astronaut Mark Kelly was sworn in as a U.S. senator on Wednesday in Washington.

Vice President Mike Pence, as president of the Senate, participated in the ceremony.

Pence and Kelly spoke about Pence’s son, Michael, who is stationed in Yuma and training to be a pilot in the U.S. military. Both men are expecting grandchildren next year.

Kelly, 56, narrowly beat Sen. Martha McSally (R-Ariz.) in a special election. The seat he won became vacant upon the death of Sen. John McCain (R-Ariz.) in 2018 and was temporarily held by Jon Kyl, a former senator, and then McSally, who was appointed by Gov. Doug Ducey after losing a race for the state’s other Senate seat to Kyrsten Sinema, a Democrat.

Kelly will finish the remainder of McCain’s original term. He will face reelection in 2022.

The swearing-in marked the first time Arizona has had two Democratic senators since 1953.

Arizona was also won by Democratic presidential nominee Joe Biden, the first time a Democrat won the state since 1996, according to certified results. The results are being contested by President Donald Trump and other Republicans.

Kelly’s swearing-in took the Republican Senate majority down one, to 52-48. Republicans have 50 seats in the next Congress, with two Senate runoffs taking place in Georgia in January 2021. Democrats retained control of the House.

Kelly is the husband of former Rep. Gabby Giffords (D-Ariz.), whose time in the House of Representatives overlapped with Pence. Giffords participated in a mock swearing-in after the real one took place with Sinema.

Walking into the U.S. Capitol before the ceremony, Kelly declined to answer questions from reporters.

Correction: A previous version of this article inaccurately described the swearing-in ceremony. The Epoch Times regrets the error.