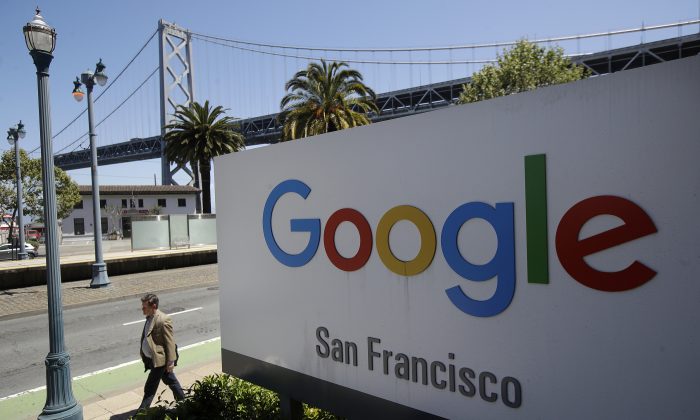 A man walks past a Google sign outside with a span of the Bay Bridge at rear in San Francisco on May 1, 2019. (Jeff Chiu/AP Photo)
Tech News

Senate Democrats on the Commerce Committee are seeking to bolster laws to protect local news outlets, highlighting how “unfair business practices” from tech giants such as Google and Facebook have been the main contributing factor in the decline of local news outlets.

“Local news across America creates competition and trusted information,” wrote Sen. Cantwell in a press statement. “We shouldn’t let regional and community news die as local newspapers and broadcasters adjust to digital delivery because online giants are unfairly leveraging the advertising market against them.”

The report states that if Americans are to continue to receive benefits from local news organizations such as transparency, fact-checking, professional editing, and timely reporting, then these unfair business practices need to be addressed.

The committee acknowledges that “addressing these unfair business practices and local news’ adoption of a new business model will take time.”

The report by Cantwell’s office was released a day before the Senate Commerce Committee is set to have a hearing with the Big Tech executives of Facebook, Twitter, and Google, titled, “Does Section 230’s Sweeping Immunity Enable Big Tech Bad Behavior?”

Democrats and Republicans have lately both been critical of Big Tech, with Republicans mainly targeting the platforms’ alleged restricting, monitoring, and silencing of conservatives. The Republicans control the majority of the Senate and the focus of the hearing, but that could shift after the Nov. 3 election.

The October report argues that local journalism is in a state of emergency, worsened by the pandemic and monopolizing behavior on the part of tech platforms, who should be held accountable by regulators.

The report shows that total newspaper revenue will have dropped by close to 70 percent by end of 2020 and that the majority of states have lost 50 percent of their newsroom workforces.

The report found that the biggest online platforms like Google “unfairly use content, take local news consumer data, and divert customers away from local news websites, while providing little in return.”

“I think the issue of privacy and also media domination by the platforms when they put their foot on the throats of local news media is also an issue,” said Sen. Cantwell.

The report proposed a variety of measures to help revive local newspapers, the first of which is to allocate funds from the CAREs Act and expand the Paycheck Protection Program to help local news outlets. “Congress should also consider targeted tax incentives and grants as at least a short-term bridge to enable local news entities to survive the current economic turmoil.”

Another suggested measure to help local news survive the influence of Big Tech is that Congress should require that “news aggregation platforms enter into good faith negotiations with local news organizations and pay them fair market value for their content.”

In addition, the report stated that legislation to allow local news outlets to benefit from data aggregation practices, instead of being disadvantaged, should be enacted by Congress.

The report argues that even with the Justice Department’s current antitrust lawsuit against Google, the FTC needs new authority now so it can force Google and Facebook to change their practices because the lawsuit could take years to be resolved.

The report concludes, “The restoration of local journalism is vitally important, not only to our democracy as the Founders envisioned it, but also to the well-being of the nation and local communities.”

“This report distorts the reality around Google’s role in the online news ecosystem and the value that we provide to publishers who face challenges in transitioning to the digital world,” said Google spokeswoman Maggie Shiels told the Wall Street Journal.

Facebook also defended itself against the claims in the Cantwell report.

“The accusation that we scrape news articles is simply not true,” said Facebook spokesman Adam Isserlis. “We give news organizations the ability to post news on Facebook free of charge, and they have full control over how that content is accessed and monetized.”