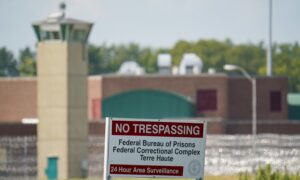 As a part of their ongoing effort, Democrat lawmakers in the House of Representatives and Senate wrote to Attorney General Merrick Garland on Monday, urging him to lead the Department of Justice (DOJ) to abolish the death penalty.

In early July, Garland paused federal executions while a review of its policies and procedures were conducted.

“The Department of Justice must ensure that everyone in the federal criminal justice system is not only afforded the rights guaranteed by the Constitution and laws of the United States, but is also treated fairly and humanely,” Attorney General Garland said in a memo to the Justice Department (pdf). “Serious concerns have been raised about the continued use of the death penalty across the country, including arbitrariness in its application, disparate impact on people of color, and the troubling number of exonerations in capital and other serious cases.”

The Democrats assert that Garland and the Biden Justice Department should go further and “halt all participation in the capital punishment system.”

“In conjunction with the moratorium on executions, Department of Justice prosecutors must stop seeking the death penalty,” Adriano Espaillat (D-N.Y.), Ayanna Pressley (D-Mass.), Jerrold Nadler (D-N.Y.), and Cori Bush (D-Mo.) wrote in their letter. “The inconsistent logic of halting executions while, at the same time, advocating for its use has grave consequences.”

“We must build a criminal-legal system that is deeply rooted in respect for humanity—and that begins with ending the federal death penalty,” wrote Bush in a social media statement Monday.

Espaillat and Pressley have sponsored separate bills that would abolish the federal death penalty. In January, Espaillat sponsored the Federal Death Penalty Abolition Act of 2021.

“The death penalty is a cruel relic of the past, and should have no place in our society,” said Espaillat in a press release at the time. “A government should not have the power to take the life of another person, and the death penalty is a deeply flawed and inherently unjust system.

Meanwhile, Majority Whip Sen. Dick Durbin (D-Ill.), Chair of the Senate Judiciary Committee, Sen. Patrick Leahy (D-Vt.) and Sen. Cory Booker (D-N.J.), led 14 of their Senate Democratic colleagues in urging the DOJ to take further steps to “end the federal death penalty once and for all,” according to a press release.

“There are serious concerns about arbitrariness in the application of the death penalty, its disparate impact on people of color, and the alarming number of exonerations in capital cases,” the Senators wrote.

U.S. President Joe Biden has promised to end capital punishment, but has not yet issued any orders related to the practice.

Former President Donald Trump resumed the use of capital punishment. The federal government carried out 13 executions between July 2020 and January 2021. The executions adopted a new protocol for administering lethal injections at the federal Bureau of Prisons, using the drug pentobarbital, which replaced the three-drug procedure that had been used in federal executions previously.

The 13 deaths all involved convicted criminals; including Keith Nelson, who was convicted of kidnapping, raping, and murdering a 10-year-old girl; Dustin Honken, convicted of murdering five people in Iowa; and Daniel Lee, who killed a couple and their 8-year-old daughter in 1996.

The Justice Department did not respond to a request for comment.