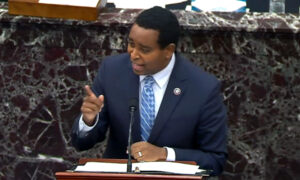 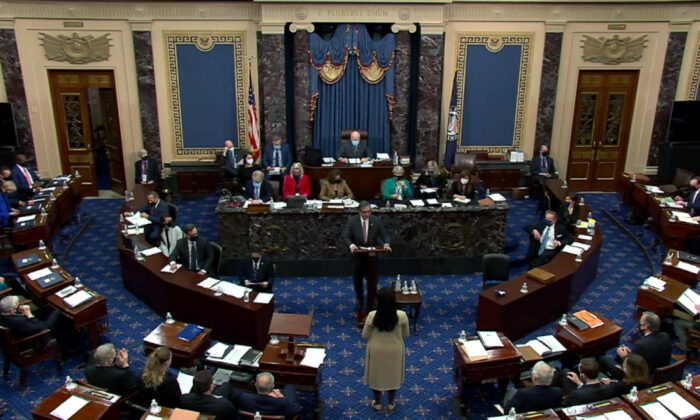 Several Democratic lawmakers have defended the decision not to call witnesses in former President Donald Trump’s impeachment trial, saying it wouldn’t have made any difference to the outcome.

Trump was acquitted on Feb. 13 in a 57–43 vote, with seven Republicans joining all Democrats in voting to convict the former president on the sole charge of “incitement of insurrection,” which Trump’s defense lawyers denounced as a “monstrous lie.” The vote fell short of the two-thirds, or 67 votes, needed to convict him.

Sens. Chris Murphy (D-Conn.) and Chris Coons (D-Del.), along with Del. Stacey Plaskett (D-V.I.), who served as one of the impeachment managers, said in statements to media over the weekend that calling more witnesses was pointless.

“Once Mitch McConnell made it clear he intended to acquit, even despite the compelling evidence, what the House managers needed wasn’t more witnesses or more evidence,” Coons told ABC News’ “This Week.”

Mere minutes after the Democratic-led House impeached Trump on Jan. 13, Senate Minority Leader Mitch McConnell (R-Ky.) wrote to his GOP colleagues that he had “not made a final decision” about how he would vote at the Senate trial. There had been close scrutiny over how McConnell would vote, given his position as the Senate’s most influential Republican and the longest-serving GOP leader ever. McConnell finally made his position known early on Feb. 13, when he told his Republican colleagues that he would vote to acquit.

“He said it’s a vote of conscience,” Sen. John Cornyn (R-Texas) told reporters on Capitol Hill, commenting on McConnell’s remarks. “So I think each senator needs to make that decision on their own. Obviously, he’s reached that conclusion.”

The House impeachment managers on Feb. 13 requested testimony from Rep. Jaime Herrera Beutler (R-Wash.), who said in a statement that House Minority Leader Kevin McCarthy (R-Calif.) spoke with Trump as a mob was storming the U.S. Capitol on Jan. 6 and that the president hesitated to call off the riots at McCarthy’s request.

The Senate voted 55–45 to begin consideration of witnesses, although negotiations between Democrats and Republicans led to a deal not to call any more witnesses, with Herrera Beutler’s statement instead entered into the official record.

Plaskett said Feb. 14 on CNN’s “State of the Union” that entering the statement into the official record was sufficient.

“I think what we did was we got what we wanted, which was her statement, which was what she said, and had it put into the record and being able to say it on the record out loud so that others would hear,” Plaskett said.

“So I know that people are feeling a lot of angst and believe that maybe, if we had this, the senators would have done what we wanted,” she said. “But, listen, we didn’t need more witnesses. We needed more senators with spines,” she said, presumably referring to the 43 Republican senators who voted to acquit Trump.

Murphy echoed those remarks on Feb. 14 on CNN’s “State of the Union,” saying that Democrats achieved their goal of drawing attention to Herrera Beutler’s statement.

“Frankly, I think they did get what they wanted. They got the whole country tuned in,” Murphy said. “In the end, the managers made the decision that it probably wouldn’t have helped their case.”

Rep. Joe Neguse (D-Colo.), another of the Democratic impeachment managers, said calling on witnesses during the impeachment trial would have dragged out the proceeding for years.

The lead House impeachment manager, Rep. Jamie Raskin (D-Md.), described the outcome of the impeachment trial as a “dramatic success.”

“We got seven Republicans, and if you look at the 10 Republicans in the House who joined us, it was by far the most bipartisan decision and a complete repudiation of the president’s conduct. Now, unfortunately, it didn’t reach the two-thirds majority in the Senate,” Raskin said in an interview with NBC’s “Meet the Press.”

Trump, in a statement following his acquittal, denounced the impeachment effort and thanked his supporters.