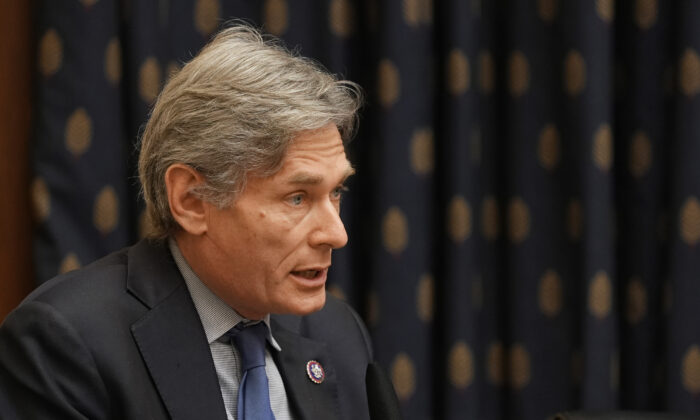 Rep. Tom Malinowski (D-N.J.), who represents a swing district, acknowledged that Democrats could lose their House majority next year and pressed fellow Democrats to pass a bipartisan infrastructure bill.

Speaking during the “Innovators For Democracy Virtual Discussion,” Malinowski was asked about recent polling for President Joe Biden and infighting among different wings of the Democrat Party.

“All that stuff is real,” the New Jersey Democrat said, referring to some polls showing dropping approval ratings for Biden and Democrats. “If the election were held right now, I don’t think we would win,” he contended before assailing the Republican Party as “crazy.”

“We’re the party that delivers … I get to go out there and say, you know, some of us get [expletive] done, and some of us are [expletive] crazy,” Malinowski said. “And that’s your choice, and most of my voters, middle of the road pragmatic voters, I think will respond to that message. I can count on [the Republicans] to remain [expletive] crazy. There’s no question about that.”

House Democrats, he contended, “just need to spend the next couple of weeks getting [expletive] done, and if we can … I think we’ll be in pretty good stead for, for 2022.”

Of primary importance to future elections, Malinowski suggested, are Democrats to focus on passing the $1.1 trillion infrastructure bill that was approved by the Senate several months ago.

Malinowski’s warning comes as other Democrat strategists and insiders have said that the party will face a significant loss during the midterms, which are just under one year away.

“The marked decline in support for President Biden and his administration nationally and in key swing states indicates that the Democratic Party could endure a blowout defeat in the 2022 midterm elections,” Douglas Schoen, who had worked for former President Bill Clinton and as an adviser to Michael Bloomberg’s short-lived presidential campaign, wrote in an opinion piece in The Hill earlier this month.

The infrastructure bill was touted by Rep. Jamaal Bowman (D-N.Y.), a member of the socialist “Squad,” as being “critical for 2022 and beyond.” Speaking to the Daily Beast, which also quoted an anonymous Democrat representative as saying the party faces a “bloodbath” next year, Bowman promised that “as we come out of this, the American people can see a government that works.”

In the 2022 midterm elections, Malinoski could be considered among the most vulnerable members of Congress as he defeated his Republican opponent last November by 1 percentage point. The lawmaker is also currently being investigated by the House Ethics Committee for his stock transactions that allegedly violated the federal STOCK Act.

Ethics Committee Chairman Rep. Ted Deutch (D-Fla.) and ranking member Rep. Jackie Walorski (R-Tenn.) both agreed to investigate Malinowski’s trades. A letter from their panel earlier this month said the investigation does not mean the committee believes Malinowski violated any laws as of now.

“The committee will announce its course of action in this matter on or before Thursday, October 21, 2021,” their release said.

Earlier this year, he acknowledged the error and told NJ Advance Media that he filed the necessary documents with the House Ethics Committee. “I own that,” he said. “I did it late and that was a mistake. I’m not in any way disputing that.”