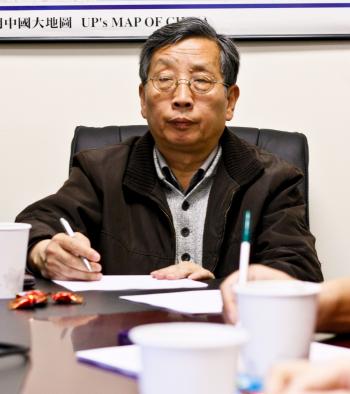 Democracy in China for an Idealist in Flushing

NEW YORK—There’s an old Chinese phrase used to describe sneaky people: “Hang lamb head on the door, but sell dog meat.” Advertisements say lamb, and customers ask for lamb, but what they’re both really talking about is dog.

The United States and the Chinese Communist Party (CCP) are precisely the same when it comes to human rights abuses in China, according to Hu Ping, 64, a veteran Chinese democracy activist.

“If anyone was to cut the game and call it dog, the other would cry foul—it would be seen as a loss of face,” he said in an interview in the office of Beijing Spring, the flagship journal of the China democracy movement, located in Flushing, Queens.

So, they lie instead. The United States issues strategic criticisms in public but tries to quash lawsuits against Chinese officials in private, keeping up the appearance that lamb is on the menu—that the CCP may one day change and is not founded on human rights abuses, Hu Ping says. Meanwhile, the CCP acts like it’s actually upset.

“The Communist Party can’t be so brazenly bad, they have to pretend they’re angry when the U.S. criticizes them; otherwise, it would be too obvious that they were so awful,” he said, puffing on a cigarette while walking to a nearby meeting.

Hu Ping has been in the China democracy game since it began, with the Democracy Wall in Beijing in 1979; at that time he was a master of philosophy student at the prestigious Peking University. He came to the United States as a visiting scholar at Harvard University in 1986. After the Tiananmen Square massacre in 1989, he was not allowed back into China.

He has witnessed the discourse about democracy and human rights in China evolve from its germination to today. He thinks it’s wise to hedge when dealing with the CCP: for example, rather than calling for a revolution, simply to call for freedom of speech.

The result will be identical, he said. “Most people, especially in China, like the term ‘reform’; they don’t like ‘revolution.’ Actually they’re the same thing. It’s all about ending the CCP’s autocracy.”

While today’s Chinese communist rulers have no use for the economic theories of Mao Zedong, the Maoist spirit is alive and strong in modern China, Hu Ping noted. “They like to learn from those Maoist methods of how to control people and suppress people. That’s what it’s about.”

The Party’s abduction of dissidents is perfectly logical from the autocrats’ perspective, he says; it is not the irrational outburst that some Western commentators have suggested. “You only need freedom of speech in China and all the other things [would] change. The dictatorship would be no more. The system is big and complex, but it relies on constant suppression. They just need to stop suppressing things and they’re finished.”

Latching onto ostensibly “safe” terms also has its strategic benefit, Hu Ping said. “You have to open a space for yourself to have your voice and ideas spread through society. … It’s not that they [CCP] can control everything. There are many places you can strike at.”

Basic human rights, freedom of speech, and freedom of assembly may look simple to Westerners, “but actually to the CCP these have come to take your life,” he noted.

Fifteen years ago Hu Ping had preempted the idea of a “Jasmine movement” in China by writing an essay calling for people to go to Tiananmen Square and simply “walk around.” There was no Twitter to spread the word then, but the CCP was scared. “They called a meeting. They told people that you can’t go to Tiananmen on that day,” Hu Ping recalled.

Beijing Spring, the Chinese-language journal he founded in 1993, stopped printing in November. It had no money. The website still publishes essays with the same purport, however, and the organization remains a hub for Chinese dissidents, and emigrants and asylees with democratic leanings. They organize events and help people find jobs. “We’ve been called the ‘second consulate,'” Hu Ping said.

While the mutually assured deception between the CCP and the United States continues at its usual pace, oblivious to a small Chinese magazine in Flushing, Hu Ping says that what his organization is doing is still important. Being a standard bearer for democracy in China is itself worthy, he said, and it is also worth keeping the Communist Party on watch. “We have to make them ashamed of what they’re doing.”