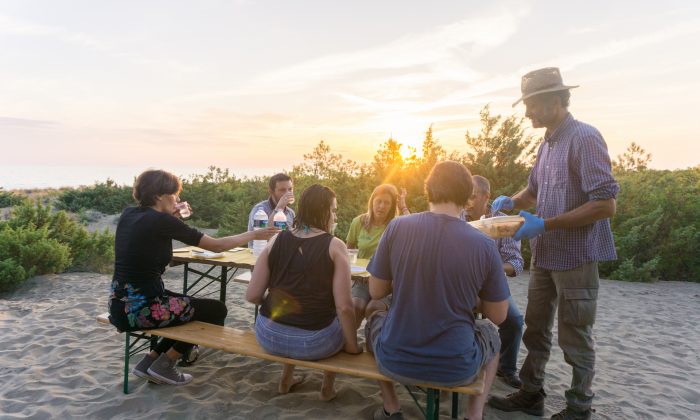 A picnic of local products, enjoyed on a pristine beach in Maremma Park, offers a true taste of the region. (Crystal Shi/The Epoch Times)
Viewpoints

Democracy Against the Family: Part 2

For more than a century, all of the modern democracies—each at a different rate—have been abandoning their foundation in ordered liberty for a new foundation of mandated equality.

This is justified as a necessary means to create a more fair and equal polity.

That has nothing to do with the original democratic promise of an equal start-line in the race of life, but, rather, with the creation by law of a more-or-less equal finish-line. Equal enough, that is, to garner more gratitude and thus more citizen-loyalty to the democratic state.

Ironically, this ambition is carried out by way of an incremental war on various kinds of privilege and moral distinction, created spontaneously by our own civil societies.

So the democracies are now at war with themselves. Privilege-producing civil societies, within equality-forcing democratic states, have ended up pitched against each other in a troubling battle to the death for citizen loyalty. Even though it’s by far the more humanly gratifying, civil society is also by far the weaker, and has been losing the war badly.

One of the great ironies of our time is that we celebrate a public love of equality, but also of human community. But the latter can only be produced by a process of social-bonding that creates insiders and outsiders—or unequals. Let’s see how that works.

In order to pass from the status of autonomous individual to membership in a voluntary association, whether we are speaking of the Boy Scouts, a marriage, a religious group, a corporation, a charitable group, or a sports team—there are thousands of such groups—there will generally always be found (weak or strong, formal or informal) a solemn rite of passage to membership.

This is a four-stage process, the elements of which are sacrifice, subordination, commitment, and privilege, the last stage being the one that raises the panic and hackles of modern equality radicals.

Sacrifice refers to the moral requirement that individuals aspiring to join any social group must voluntarily agree to place the common will of the group above their own individual will, for all healthy civil associations are “we-based,” rather than “me-based.” This is also the most spiritual of the four elements, demanding a voluntary suppression of self. From this flows the bonding of group loyalty.

The motto of an organization such as Rotary International, for example, with its 35,000 member clubs and 1.2 million members, is “Service Above Self.” If the willingness to sacrifice for other members is intentionally withheld, a member will usually be shunned, disinvited, or forced out.

Subordination refers to the requirement that for group discipline, all members must submit to the authority and rules of the group, without which no ruling hierarchy of authority is possible. Members carry an understanding, whether verbal or written, of the rules by which they feel bound and by which they proudly distinguish themselves from non-members.

Commitment is the public process whereby, the first two requirements having been met, a member will generally make a vow, or commitment, to the group, normally by way of an oath, a pledge, a written contract, or some simple signifying act bonding the member to shared group ideals and activities. The moment of this insider/outsider distinction between one citizen and an “other” is a profoundly anti-egalitarian moment—in today’s terms, a profoundly anti-democratic moment—without which no human community can be formed.

Privilege is the reward stage, whereby specific benefits, privileges, and even protections are bestowed upon qualified members. This stage is usually accompanied by some kind of signifying ceremony in which the commitment or vow of loyalty is made, and by special symbols, costumes, handshakes, or celebrations intended to distinguish members from non-members. Sworn or signed-up members of innumerable civil associations are expected to be loyal, perhaps carry a membership card, wear a pin or a tie, be dutiful, pay dues, do any required work, abide by the rules, treat fellow members differently from—dare I say, better than—outsiders, and so on.

Most significantly, individuals who marry will sign covenants, wear rings, get lawful and exclusive sexual access to each other, and in societies that haven’t completely capitulated to the egalitarian dispensation by extending heterosexual marital privileges to “any two persons” without regard to their procreative potentiality, will qualify along with their children for certain legal, tax, and social privileges until very recently only available to the union of one man and one woman.

Anyone can see that the human social-bonding process I describe is natural, preferential, intentionally exclusionary, and privileging. Always has been. But the modern democratic project is to weaken, circumvent, or destroy all hint of privilege that may embarrass the state’s pledge to treat all citizens equally in terms of outcomes.

Needless to say, any fool knows that no two human beings are ever “equal” in themselves, and that naturally free and unequal human beings will very likely create naturally unequal outcomes. Hence, the attack by all the democracies on human social-bonding and the effort to convert it to state-bonding via the medium of forced equality.

In the case of outright totalitarian systems such as communism and fascism, where the state’s intent to dissolve, or at least hobble, civil society altogether is spelled out clearly in public policy, the attack comes from above. I hasten to mention that in the case of communism, this is an instructive irony, because Marx’s theory predicted the “withering away of the state.” But in every Marxist regime, the state has grown and thrived largely by absorbing civil society into itself. The gist of this essay is that we now see this very process at work in all the democracies, as well. On your Marx!

But in the case of the democracies, the attack on civil society tends to come not from above, but from within, by way of attacks launched by radicals who have drunk the state’s equality Kool-Aid; this attack is less ideologically rigid, a little sloppy, but no less effective.

The result, in either case, is the radical disempowering, if not complete destruction, of civil society. I say “not complete,” because that would be counter-productive. Egalitarian states that seek to engineer a swap of citizen loyalty from civil society to themselves are like the professional torture-master. They keep the victim weakened but alive as long as possible to get what they want, producing whatever goods the state may find essential and seek to control, but finds too difficult to create by itself.

Canada’s single-payer health care system is a sterling example of this very tactic. A precise example of how the state’s war against civil society is rolled out. The Canadian state regulates the quantity and kind of health care legally permitted throughout the nation, outlaws the private purchase or sale between citizens and physicians of all medical services controlled by the state, but relies on the tax-funded, state-controlled, and precisely limited reimbursement of private physicians, technicians, clinics, and hospitals to deliver it.

Of special interest is the manner in which many egalitarian objectives are achieved in the democracies, not by the dangerously unpopular idea of removing exclusive rights, privileges, laws, and protections from once-favored social groups such as the traditional family, but by boosting the tax base a little more and granting those same privileges and rights to every individual without the customary qualification (as mentioned, you just have to be one of “any two persons”) and, in this fashion, removing formerly powerful distinctions that once conveyed exclusive social privilege, moral distinction, and status.

In effect, the democratic state eliminates various kinds of privilege by converting them into general welfare handouts. This has the same effect on once highly honored social institutions as giving a once-cherished medal for bravery to a coward.

The language of radical democracy at work in this demolition process is evident in our daily newspapers, if we care to see it. I keep a file of documents that has tracked this trend. The very first item is a Toronto Globe and Mail newspaper article of Nov. 25, 1999, describing how a lawyer, incensed that the legal and financial benefits of traditional marriage were at that time denied him, was determined to take his case all the way to the Supreme Court of Canada to argue that the law creates “sexual apartheid.” Why? Because, he argued, it doesn’t eliminate all social and moral distinctions between an almost infinite range of “family types.”

His main point was that “privileging heterosexual relationships is contrary to the equality guarantees, and thus unconstitutional.” He correctly landed on “privilege” and “equality” as the two opposing terms of the West’s long civil war of values against itself that has been my focus here.

So we could say that in the name of equality, modern democracies are stealing customer loyalty from their own living societies, hoping for a more dead society and a more alive state. But this is a moral contradiction, since society is based on voluntary acceptance of membership and authority (it’s morally alive) and the state on involuntary power (it’s morally dead).

What’s to be done? We need to repudiate the state’s self-serving centralizing language of egalitarian democracy in order to revive the social freedom and privilege-engendering authority that’s a natural product of membership in all human voluntary associations. And that would mean inventing a new public terminology to de-emphasize forced equality as a democratic right, for the good reason that this claim operates mostly as a cover for more incursions of state power in its effort to transfer citizen loyalties to itself.

Be warned: When civil society is weakened to near-extinction, citizens lose their last buffer and protection against state power.

I’m imagining that such a language will respond to the call for more “individual rights” with a counter-call for “society’s rights,” and to a call for more personal “freedom of choice” with a counter-call for “social freedom” and hence, a strengthened (because normally bonded) “free society,” rather than merely “free individuals.” We need a public recognition that the privileging social-bonding process outlined above is absolutely essential for the formation of human community, that without human community there can be no civil society, and without a strong civil society, autonomous individuals are left naked before the power of the state.

Restoration of a more free society, then, would of course mean that individuals would be exposed to more, and more varied, forms of voluntary moral authority, with which they could deal as they wish—remain bonded to the group, or get out—but also to far less coercive power from the state. We would be more encumbered in terms of opportunities to fulfill the abundant moral obligations typical of all social-bonding, but less encumbered in terms of bending under raw power.

I think that would be a good deal. It would shift the ground of our political and moral relations from dependency on the grossly excessive ministrations and regulations of the state, to consent, independence, and belonging within real moral communities that serve as a buffer between ourselves and raw power. The point is that a return to a defense of the traditional rights and authorities of civil society can satisfy our longing for community, as well as for freedom within community.

Because most human beings long to belong, let it be together and by choice to the warm and privileging bonds of their own civil society, rather than alone and, by default, to the leveling state.