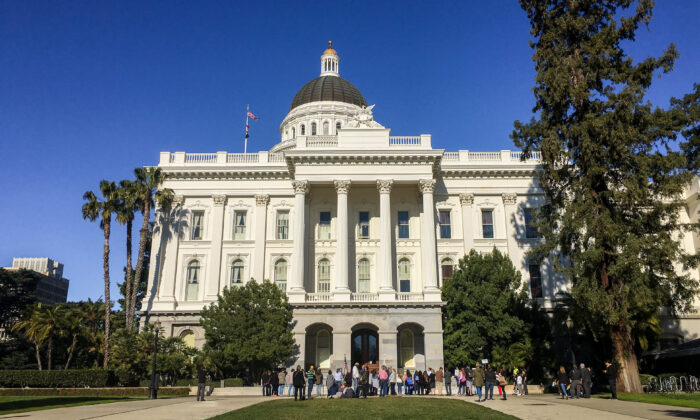 Demi Minor is a biological man who identifies as a woman. After the New Jersey correctional facility transferred Minor to a female prison per her request, she impregnated two female inmates.

While Minor’s case has caused heated debate about gender-related public policies, a few Asian community leaders in the San Francisco Bay Area have urged parents to pay attention to incidents that occurred in local schools.

Jeff Wang served as a board member of the New Haven School District in Union City from 2016 to 2020. Wang told The Epoch Times that some school boys claiming to be girls entered female restrooms and attacked female students. “This has happened in California, and even in the Bay Area already,” Wang stated.

Wang is one of the candidates currently running for Union City council member.

Wang declined to disclose more details about the events, citing privacy protection of the minors involved. He said that the current policies related to transgenderism and sex education have gone too far.

George Yang was a candidate for this year’s California State Superintendent of Public Instruction in the primary election. When commenting on the Demi Minor case, Yang said, “This is something most people would think of as idiotic just 20 years ago, or even 10 years ago … Yet no one dares to call it out because it is the prevailing view allowed by the people in charge.”

“The State Department of Education, which is overseen by the Superintendent of Public Instruction, has tried to give guidelines that recommend materials for kids not appropriate for their grades, especially in the area of telling kids they have multiple choices when it comes to gender. I think that’s very dangerous,” Yang stated.

“This [Demi Minor case] is becoming not about LGBTQ. It is a test if you are willing to set aside what is true and what is false, set aside your honor, to placate the people in power so you’ll also have power,” Yang further asserted.

What Wang and Yang said are part of the long controversy about California’s public school sex education programs. Parents and educators have debated for years about how early and to what level the school curricula will include sex education.

Wang said when he served as a board member of New Haven School District, his district was the only school district in Union City that blocked the progressive curricula of sex education.

“Most parents would not want their children, especially those who are younger than fourteen, to be exposed to sexually explicit materials,” Yang said. He believes that the parents, instead of schools, should be the ones to decide for their  children the content of sex education to ensure it is age appropriate.

Both Wang and Yang urged Asian parents to get more involved in their children’s education.

When working as a school board member, Wang found that many Asian parents are first generation immigrants. They don’t get involved in their local school districts’ decision-making process. As a result, they leave their children’s education entirely in the hands of the schools.

“Parents are the bosses. They elect the school district board members,” Wang said. He explained that school district boards usually consist of five elected members, and they can vote to decide which sex education curricula are to be adopted for their district. Wang strongly believes that sex education should not start earlier than the sixth grade.

For years, parents in California have taken different approaches to deal with the State’s controversial sex education curricula.

In December 2020, The Epoch Times reported how concerned parents like Denise Pursche fought to have a say in their children’s education. In a recent follow-up The Epoch Times found that Pursche eventually took her children out of the local school programs, and started to homeschool them. Her daughter has already successfully graduated from  high school and started her college education.

Wang said that the least parents can do is read through the textbook and decide if the sex education curriculum is appropriate for their children. Wang pointed out that parents in California have the right to opt their children out of sex education. All they need to do is go to the school and sign a paper.

Yang urged Asian parents to “look into your local school board elections. Try to find out who is running, and try to find out their moral compasses.”

Yang said lots of Asian parents simply put their children into a good school district, and then automatically assume their kids will learn what they want them to learn. “You just cannot assume that,” Yang said.