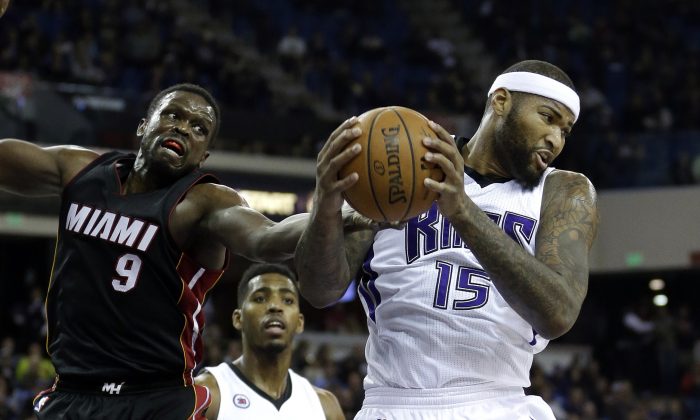 Sacramento Kings star DeMarcus Cousins could demand to be traded if the team decides to hire George Karl, according to NBA insider Ric Bucher.

Cousins sparked criticism and wonder when, answering questions about the Kings recent play and the possibility that the team hires Karl after a recent game, he went on a bizarre rant that included the line: “How you going to stop God’s plan?”

Cousins also noted that he’s been put through a lot in Sacramento, including the firing of coach Michael Malone earlier this season.

The problem with hiring Karl is that Cousins was told earlier in the season that Karl would not be the right coach for him, a source told Bucher.

“Forget the semantics over when, or even if, Karl is hired. Cousins has been told it’s what the Kings want to do after being told it wasn’t, which raises a serious question: How much does owner Vivek Ranadive really value Cousins?” Bucher wrote.

Ranadive told Cousins that he was forced to fire Malone because Malone didn’t get along with general manager Pete D’Alessandro and had been insubordinate by missing a meeting. Cousins insisted that Sacramento hire a veteran head coach, with former Warriors coach Mark Jackson as his preference. But Ranadive was convinced by the Kings staff to leave interim coach Ty Corbin in place until the end of the season.

That decision was relayed to Cousins, but management emphasized to the star that he would be consulted on whatever moves were made in the future, including the coaching search.

That has now changed quickly, with D’Alessandro convincing Ranadive to take a chance on Karl, despite concerns from Cousins.

Karl is expected to debut as the Kings coach on February 20 when Sacramento takes on the Celtics, reported Ailene Voisin of the Sacramento Bee.

Cousins signed a four-year extension in September 2013 worth about $62 million.

“Cousins took the blame for Paul Westphal being fired, even though he insists he never asked for it. Some questioned how he’d take to a no-nonsense, defensive-oriented coach in Malone, expecting that Cousins was too immature; yet Cousins not only helped make it work, he flourished under Malone. He kept his mouth shut and made Team USA, bringing a much-needed, and long-missing, shine to the franchise. He followed that with a start so strong it earned him an All-Star berth in spite of his illness and the team’s woeful record,” Bucher said.

“In appreciation for all that, the Kings have allowed what started out as a promising step in the right direction to become a drunken stumble. Just like another team did a little farther south. Cousins deserves better. Don’t blame him if he seeks it elsewhere. After all, he wouldn’t be the first.”