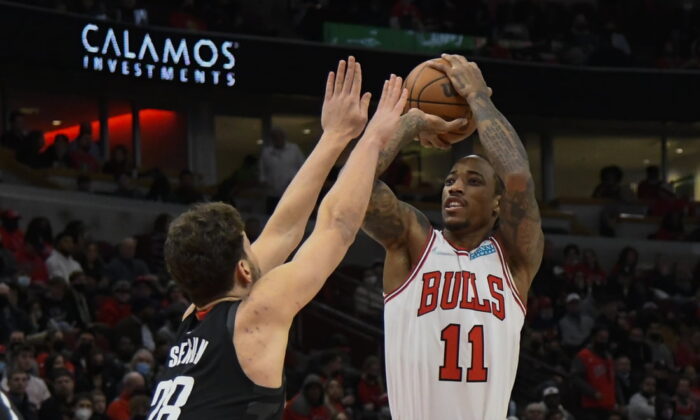 DeMar DeRozan scored a game-high 26 points and Coby White followed with 24 to lead six players in double figures as the host Chicago Bulls cruised past the Houston Rockets 133–118 on Monday for their second victory in as many nights.

Severely short-handed amid a team-wide COVID-19 outbreak, the Bulls endured another loss when Alex Caruso left the game in the first half with a sprained left foot.

A balanced attack helped Chicago pull through while surging ahead by as many as 25 points. Lonzo Ball (19 points), Nikola Vucevic (18), Alfonzo McKinnie (16) and Tyler Cook (11) also scored in double figures for the Bulls, who benefited from a season-high 66 bench points.

Christian Wood posted a double-double of 23 points and 11 rebounds to lead Houston, giving him six games with at least 20 points and 10 boards in the past 11 games.

Jae’Sean Tate scored 16 points for the Rockets, Armoni Brooks had 15 and Eric Gordon and Josh Christopher chipped in 10 apiece. Houston has lost five of seven.

Chicago, which edged the Los Angeles Lakers by five points on Sunday in its first action in eight days, will try for a sweep of a swift, three-game homestand when the Toronto Raptors visit the United Center on Wednesday.

Chicago shot 60 percent in the first half en route to a 73–54 lead at intermission. DeRozan paced the Bulls with 16 points on 8 for 13 shooting, while Ball (13 points) and White (11) rounded out a balanced attack that featured 31 points from the starters and 30 from reserves.

The Bulls showed some razzle dazzle along the way. During one sequence, DeRozan corralled a full-court pass from Ball and scored, with Ball holding his arms aloft to signal “touchdown” as the play concluded.

The Bulls committed three turnovers in the first half compared to nine for the Rockets. Wood led all scorers at the break with 17 points as the Rockets shot 51.4 percent.

For the game, Ball dished eight assists and Vucevic had six rebounds.

Chicago salvaged a split in the season series. Houston won by five on its home floor on Nov. 24.