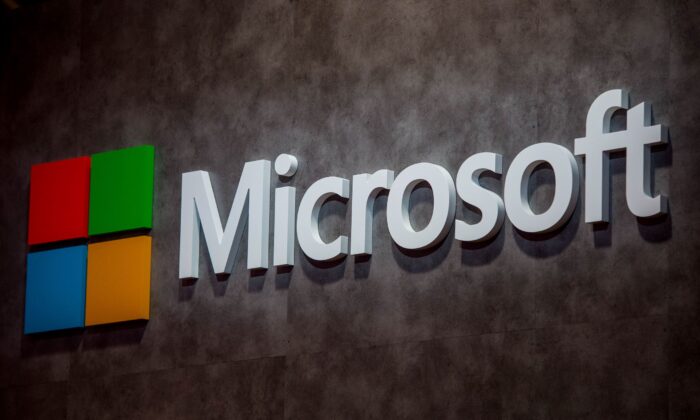 A logo sits illuminated outside the Microsoft pavilion on the opening day of the World Mobile Congress at the Fira Gran Via Complex in Barcelona, Spain, on Feb. 22, 2016. (David Ramos/Getty Images)
Russia-Ukraine War

Google searches for Windows 10 activation methods in Russia have risen by 80 to 250 percent during the past 90 days, according to a June 27 report by Kommersant newspaper. One of the fastest-growing queries in June was for the free download of Microsoft Excel, with searches growing by 650 percent.

“End-consumers do not yet have problems with registering and activating products. As for legal entities, it all depends on whether the company is under sanctions or not,” Igor Martyushev, director of development of electronic services and software solutions at Marvel Distribution, said to Kommersant.

Martyushev estimates the current level of boxed Microsoft OS stocks to last for several months. There have been no new deliveries of boxed OS, he added.

Russian citizens buying a boxed version of Windows OS or a laptop that comes pre-installed with the OS will only be able to use it if they select a country other than Russia or Belarus during the registration process, according to the paper.

Microsoft had suspended new sales of its products and services in Russia on March 4, just days after the Ukraine invasion. The tech firm is also “significantly” scaling down operations in the country, the company said to Bloomberg.

Over 400 employees will be affected by the move. “We are working closely with impacted employees to ensure they are treated with respect and have our full support during this difficult time,” the company stated.

Moscow has asked government departments and state-owned companies to cease using Windows OS and switch over to Linux, according to a June 24 report by The Moscow Times.

On a public procurement website, hundreds of contracts for buying and installing Linux, worth billions of rubles, have been posted by entities like Rosatom, Gazprom, clinics, and so on.

Russia is also facing problems when it comes to industrial sector software used in farms, factories, oil fields, etc. Industrial manufacturers like SMS Group GmbH and Siemens AG have been forced to shut down operations in Russia due to international sanctions.

Speaking to Bloomberg, Elena Semenovskaya, a Russia-focused analyst at IDC, said that sourcing software for computer-aided design and manufacturing is turning out to be a key issue that might be a drag on the country’s development.

“Russian analogues in this area are much weaker and the need is high,” Semenovskaya said. “But for now the approach is to rely on piracy and outdated copies, which is a dead-end and not sustainable.”