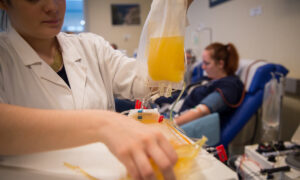 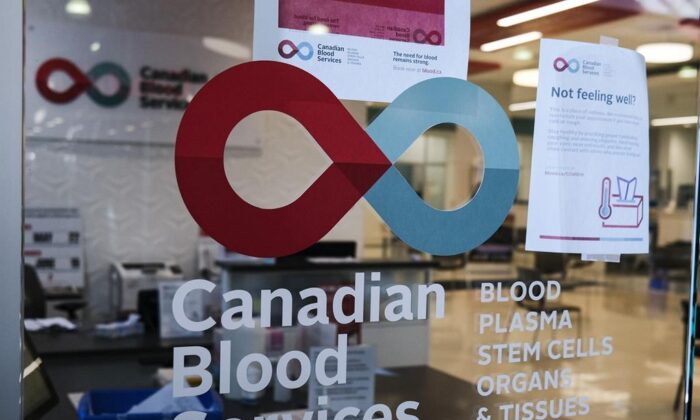 A blood donor clinic pictured at a shopping mall in Calgary on March 27, 2020. (The Canadian Press/Jeff McIntosh)
Canada

CALGARY—A return to a somewhat normal summer as COVID-19 restrictions are eased is putting a strain on Canada’s blood supply.

Several provinces have started lifting restrictions—most notably Alberta, British Columbia and Saskatchewan—and demand is up as a result.

“You can imagine that they are trying to catch up with some of the backlogs, some of those surgeries that were put on hold during the pandemic. They’re trying to get those in … (and) blood products are becoming more in demand.”

The need for blood products tailed off dramatically 16 months ago as the pandemic brought travel to a near standstill and all but the most critical surgeries were cancelled.

At the same time, Canadian Blood Services wasn’t able to accommodate as many donors because of physical-distancing requirements at clinics, so the two balanced each other out.

About 400,000 of Canada’s 37 million population give blood on a regular basis.

Canadian Blood Services operates a national inventory that allows products to be regularly shifted around the country to meet hospital and patient needs.

But the inventory has a shelf life—a year for frozen plasma, 42 days for red blood cells and five days for platelets—so it takes some work to ensure supply continues to meet demand.

Smith said the blood agency has made some changes in anticipation of an increased need, including extending hours at some donation centres and mobile clinics, but many pandemic safety precautions remain in place, including limiting the number of donors allowed inside at one time.

“We’re only accepting appointments from donors. We’re not accepting walk-ins in order to manage our physical distancing,” Smith said. “It’s more important for donors to fill the appointments for us.”

Smith couldn’t say how much the demand for blood has increased in the last six weeks, but she said the need is evident in supplies of O negative blood, the universal blood type used primarily in emergency rooms.

“We have just over four days supply and at times it’s dipped to between three and 3 1/2,” she said. “That gives you an indication of the increase in demand that we’ve seen.”

A Calgary vascular and trauma surgeon said operating rooms have been a lot busier in the last six weeks.

“There’s certainly no slowdowns. It’s more in the other direction trying to catch up,” said Dr. Paul Cantle.

“At certain times of the year, (blood supply) is always a concern, but very few of us have ever run into a situation where we haven’t had what we’ve needed at the end of the day.”

Cantle said people go out more in the summer, drive more on highways and spent more time in physical activity, so it’s not a surprise blood demand has gone up.

“It was inevitable. People just try and get out there and enjoy their summers: getting out on their ATVs and their horses and their mountain bikes,” he said.

“It’s the same every year, but it’s maybe just a little more extreme this year with people trying to make up for lost time.”