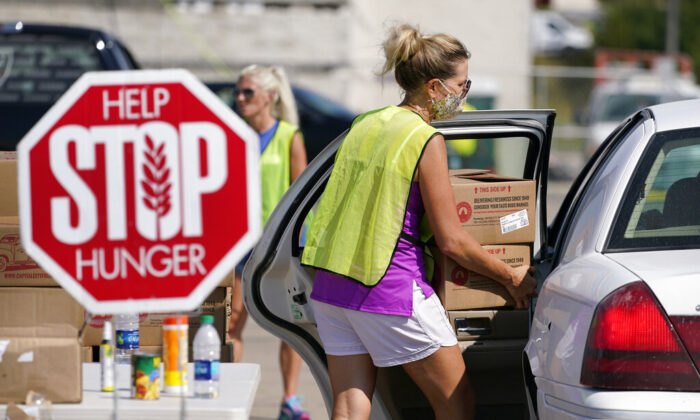 A volunteer loads a local resident's vehicle at a drive-up produce giveaway organized by a Des Moines food pantry on Aug. 28, 2020, in Des Moines, Iowa. (AP Photo/Charlie Neibergall)
US

The empty shelves at the San Antonio Food Bank show the results of growing demand versus available supply. Still, Eric Cooper, president of the food bank, said he’s “not panicked yet.”

“Yet” seems to be the operative word, Cooper said, as the Texas-based food bank, critical to meeting the nutrition needs of 90,000 individuals each week, monitors the food donation situation closely.

“The demand is outpacing some of the incoming supply, emptying some of those shelves. We’re not crazy panicked, but if it erodes a lot of our existing inventory and we’re not able to keep the flow backstopping it, it can bankrupt the food bank,” he told The Epoch Times.

Like many other food banks across the country, the San Antonio Food Bank is dealing with the effects of inflation, which translate into higher demand and fewer donations.

“When we think supply chain, it’s all about movement and the cost of movement. Everything transported is being charged a higher premium because of diesel,” Cooper said.

The greatest need is lean protein, now in shorter supply because of the highly infectious avian flu that has forced many poultry farms to cull their bird populations.

The skyrocketing cost of fertilizer and its lack of availability affect farmers’ ability to grow food. It’s a weather vane pointing to a “perfect storm,” Cooper said.

“You add for individual families the cost of the rent. Folks can’t afford to pay their rent,” he said. “They can’t afford groceries now. Texas is on the verge of one of our hottest summers. Utilities will be high.

“All of this is adding up to a perfect storm of need and demand. We are suffering from some of the same symptoms [higher fuel costs and the ability to procure food], sometimes paying more than we ever have.”

From dry goods to canned food and even baby formula, the San Antonio Food Bank is struggling to meet growing demand against dwindling supply.

“Because the demand is so high, manufacturers are selling out. They do not have the overruns they used to have. They can’t meet the market orders,” Cooper said.

Founded in 1980, the San Antonio Food Bank currently serves families and individuals in southwest Texas. At the height of the COVID-19 pandemic, demand reached 120,000 individuals each week.

“We were freaking out” at the pandemic’s start in March 2020, he said.

“There just wasn’t any food in our warehouse,” Cooper said. “Our donations from the food industry started to dry up, and our demand just went through the roof.”

Now serving about 90,000 people every week, that number is offset by 20 percent fewer food donations, according to Cooper.

The food bank currently distributes about 74 million meals annually with the help of more than 500 partnerships.

At the Midwest Food Bank (MFB), Procurement Director Brian Zink said the faith-based organization is “doing OK” with food donations amid a noticeable uptick in demand.

“We do see the effects and where there are limits in terms of shortages of truck drivers, increases in fuel prices,” Zink told The Epoch Times. “Our locations have a fleet of trucks”—from box vehicles to semi-trailers.

Doing ‘OK,’ But Donations Down

“I would say that donations are still doing OK. We can maintain supply for our agencies and our partners,” Zink said.

Zink said dry food donations are “very much down” in 2022.

“We’re focused on high nutrition—or increasing the nutrition, I should say. On the donation side, it’s somewhat limited. We do rescue a good deal of produce and dairy items and frozen,” he said.

Pasta, canned goods, lean proteins such as chicken and turkey—”We’re still trying to make up for some of the shortages on the lean protein side” because of the impact of avian flu. Zink noted.

Procuring dry goods and easy-to-prepare meals is “just difficult keeping that fulfillment up—domestically especially—for those products at the retail level [because of higher costs]. That just means there’s less available for donation especially.”

“I would say inflation and food prices have increased demand at the food bank and food pantries,” Zink said. “With inflation recently, and the increased price of goods, there’s going to be that natural [move to] where people will seek more food from the demand side of things.

“I will say we will try and maintain a variety of products in the food pantry and people picking up food at our locations. Where we do have shortages [and] we will do our best to be good stewards of our donor funds.”

However, other food banks across the country report relatively stable inventories, despite higher costs and increased demand. Part of the reason for this is the difference in procurement models. Some food banks rely solely on donations, while others purchase food, or it’s a combination of both.

Greater Boston Food Bank Public Relations Director Gary Roy said the organization purchases about 70 percent of its food. The challenge now is finding paid warehouse workers to get the food ready for distribution.

With 600 distributors, the food bank currently serves roughly 600,000 individuals in Greater Boston, west to the Worcester line, including Cape Cod and the islands, Roy said.

“We haven’t heard much about any problem with food supply,” although demand doubled during the pandemic, Roy said.

At the Los Angeles Regional Food Bank, Director of Marketing and Communications David May said the situation is “not dire.”

“Our distributions are continuing, and we are able to get food out into the community of L.A. County,” May told The Epoch Times.

Through donations, the food bank serves more than 800,000 people every month. About one-quarter goes to children and 10 percent to the homeless.

Cooper said the war in Ukraine and the anticipation of lower crop yields this year are also on the San Antonio Food Bank’s radar.

Since the infant formula recall by manufacturer Abbott in February, supplies of baby formula are in short supply, he noted.

“We don’t have any in our warehouse because the Abbott recalls shorted retailers,” he said. “There’s some panic. A couple of retailers have been able to meet some demand. Until they catch up and there’s more product produced, it’s just a little scary.”

“If the demand posts higher than the supply, it will only take a few weeks, and we’ll be upside down.”

Sadly, the food bank has grown accustomed to rationing, according to Cooper.

“Families are leveraging what they do receive from us to decrease their overall food costs, but [they’re] making up some of the shorts from the food bank,” he said.

While baby formula at MFB. sites has been in demand and offered “at times,” the food bank maintains strict guidelines on product expiration dates, Zink said.

“It takes time to receive the product into our location [and] distribute to agencies—especially if it’s a large donation,” he said.

Cooper described the shortage of food donations as going to “Code Orange before it’s Code Red.”

With overall food donations generally getting tighter, the situation is “very turbulent.”

“It’s OK to have some empty shelves. It’s just how many. We’re now seeing this uptick in demand,” he said. “Depending on how high that demand goes will determine how anxious we get in the future—and how many empty shelves we’ll have.”