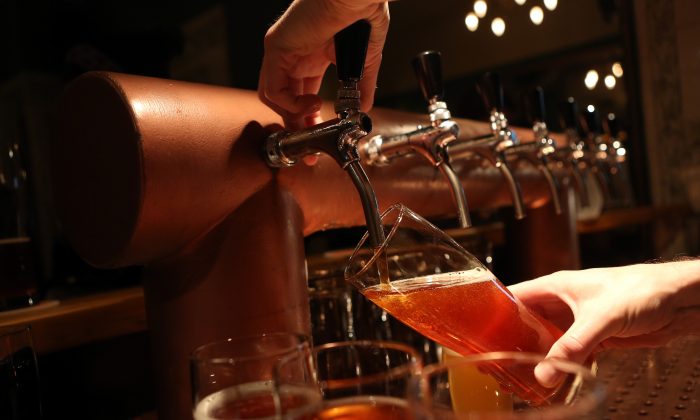 A bartender at Hops & Barley brewpub pours a pint of beer on Nov. 12, 2013, in Berlin, Germany. In a country known for centuries for its beer, several microbreweries have opened within the past year that are not only bending traditional rules on the types of ingredients used, opting for American-style hops such as Amarillo and Cascade instead of German ones, but also moving beyond the official legal doctrine, known as the Reinheitsgebot, or 'German Beer Purity Law,' which stated that water, barley and hops were the only ingredients allowed in the production of the beverage. While the law has since been expanded, it continues to be referenced on beer bottles for marketing purposes. (Adam Berry/Getty Images)
Business & Economy

Demand for Craft Beers Sparks Surge in US Hop Production

MOXEE, Wash.—Demand from craft beer brewers led to an 11 percent increase in U.S. hop production in 2015 compared to the previous year.

Those three states produce about a third of the world supply. Oil from hop cones is used in beer for flavoring and stabilizing.

Production and acreage increased in all three states despite extreme heat early in the season and a low winter snowpack that influences irrigation.

“Considering those challenges and the amount of first-year plants in the ground which have smaller yield, we are pleased with the final count and looking forward to next year,” Ann George, executive director of Hop Growers of America and the Washington Hop Commission, told the Capital Press in a story on Friday.

The National Agricultural Statistics Service said the preliminary value of the crop is $345.4 million, up 33 percent from the 2014 crop.

Demand for those aroma varieties has driven demand “to a level that has challenged the industry to continue to expand production at an equivalent rate,” George said.

George said hop acreage in the Pacific Northwest has increased 48 percent in the last three years.

Meanwhile, George said, European producers had one of their toughest years in more than a decade due to drought, with production dropping 24 percent compared to last year.

She said production in Germany, which produces a third of the world crop, is down 26 percent.