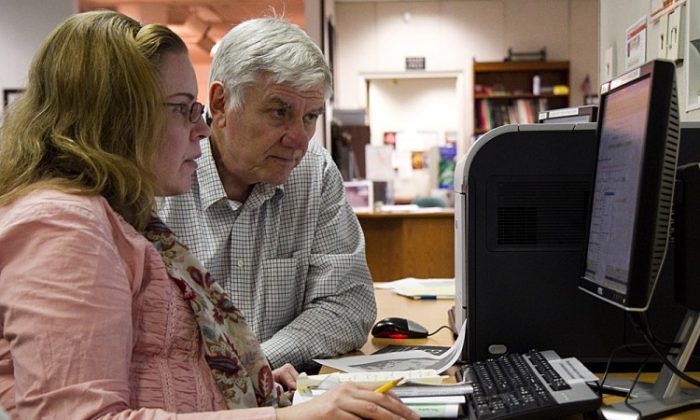 A screenshot of the offical 1940 census archive website. (http://1940census.archives.gov)
US

NEW YORK—With the release of the 1940 census on April 2, researchers and amateur searchers alike can enjoy having access to a vast amount of data about the country and its people on April 1, 1940.

However, for New Yorkers and the rest of the nation searching for information about relatives on Monday, the main website of the census was not operational.

“It’s overloaded, and even though we contracted it out, even this is not handling it,” said Angela Tudico, archives technician at The National Archives at New York City.

“I haven’t been able to find anything today,” said Craten Saunders, a third-generation New Yorker who was searching for information about both sets of grandparents. “Previously I’ve been able to find stuff in 1925, [when] New York had a special survey, and something in the 1930 [census], and I’ve waited for eight years for the 1940 census.”

Patrick Connelly, archives director, was able to find his parents’ information before the website became overloaded. He had access to the site before the 9 a.m. digital release of records.

Despite access being temporarily down, Connelly said the new data would bring in “a whole new crop of genealogists.”

“We [the archives] might not be seeing them from this, but they’re going to learn information from the census that’s going to point them to other things that they will have to see us about,” said Connelly. “So that’s the hope. That’s the nice thing with the census, it’s kind of a gateway—it points you to marriage. birth, citizenship, passenger arrivals, all sorts of things.”

At least three other websites were working on providing census information—Ancestry.com, FindMyPast.com, and FamilySearch.org

Census data can be released only 72 years after it is collected. This is the first time census data is available digitally, although data from the 1930 census is available in PDF form.

Staff at the local branch of The National Archives demonstrated how to navigate through the 3.8 million images to several dozen people after the release of the records.

As of 2 p.m., data for New York State was in the process of being uploaded on Ancestry.com, which typically requires a subscription, but is available for free until midnight on April 10. At public libraries and the local branch of the National Archives, it is always available. Smaller states such as Delaware, Maine, and Indiana were available.

A wealth of information from up to 34 questions in the 1940 census, including 13 questions about employment of people 14 years and older, gives insight into life during the Depression era. Two persons out of every 40 were randomly chosen to answer 15 additional questions.

Questions include basics such as street address, gender, and race, as well as details, such as relationship to the head of household, and where the person lived on April 1, 1935.

Since the online census data is not currently indexed, searching for persons requires an Enumeration District (ED), which is an area that can be canvassed by a single census taker (enumerator), according to stevemorse.org, a website repeatedly referenced by National Archives and U.S Census Bureau staff as the best resource for finding the ED.

To find the ED, an address or cross streets are needed. Multiple sources may contain this information, such as birth, marriage, and death certificates, employment records, and local newspapers.

Volunteers are sought to help name index the data to make searches easier at the1940census.com. The census should be indexed in six to nine months.