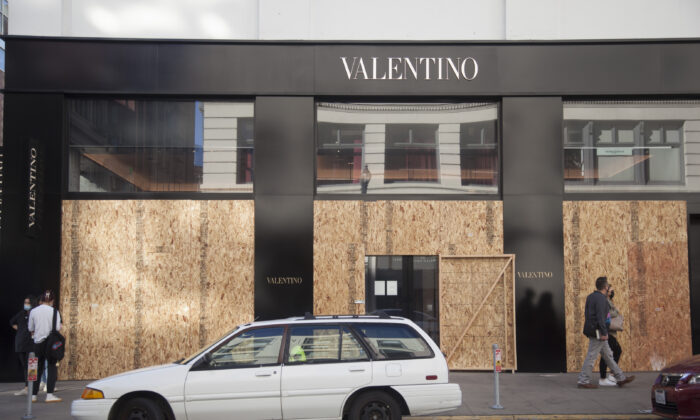 A series of smash-and-grab robberies are leaving stores with boarded up windows in San Francisco on Nov. 22, 2021. (Lear Zhou/The Epoch Times)
Southern California

A California state lawmaker has gone against the grain of the Democratic Party’s progressive wing by introducing legislation that would scrap part of a law that allows shoplifters to steal up to $950 in goods without being charged with a felony.

Assemblyman Rudy Salas (D-Bakersfield) introduced Assembly Bill 1603 (AB 1603) on Jan. 3. The bill would crack down on retail theft in the state by reducing the threshold for petty theft from $950 back to $400, which was the law in California before Proposition 47 (Prop. 47) was passed in 2014.

“Enough is enough,” Salas said in a statement on Jan. 4.

“We need to fight back against the criminals who are stealing from our communities. We have seen the unintended consequences of Prop. 47’s weakening of our theft laws and I believe California voters are ready to make their voices heard on this issue again. AB 1603 provides that opportunity and will allow us to take a stand against the theft and criminal gangs who are plaguing our state.”

California prosecutors say that the number of thefts in local jurisdictions is likely underreported because business owners became discouraged after the charge against many criminals was reduced to a misdemeanor, according to the release.

Meanwhile, critics claim the policies of progressive district attorneys in cities such as San Francisco and Los Angeles have led to an alarming surge in smash-and-grab robberies and other property crimes.

On Nov. 4, 2014, California voters passed Prop. 47, a referendum that proponents touted as the Safe Neighborhoods and Schools Act, which irked opponents such as the California Police Chiefs Association (CPCA), which called the ballot title and summary misleading.

At the time, voters were told that Prop. 47 was intended to keep nonviolent criminals out of state prison by downgrading some crimes from felonies to misdemeanors, thus saving money on housing inmates. The saved money would then go into a fund to support schools as well as rehabilitation programs, including providing offenders with counseling, therapy, housing, and job opportunities.

In June 2019, the Board of State and Community Corrections announced that it had awarded $96 million saved by Prop. 47 to rehabilitation programs. It was the second round of Prop. 47 funding; the first came in 2017, awarding $103 million to such programs.

But law enforcement agencies claim these programs are not an effective replacement for the deterrent of tougher penalties for property crimes, which Prop 47 eliminated.

In 2020, then-CPCA President Ronald Lawrence warned lawmakers that Prop. 47 had led to a steep rise in marauding bands of shoplifters terrorizing stores across the state, but attempts to scrap the law have failed.

He told The Epoch Times that Prop. 47 also made it easier for some drug addicts to fund their habits through shoplifting—thus contributing to homelessness—and undermined the ability of police to arrest drug users for possession, which was often used as a path toward rehabilitation.

“There was no more drug court, and there was no more ability to put them on probation and get them into mandatory drug rehab. So now when we find somebody in possession of opioids, methamphetamines, cocaine, or ecstasy—name your drug—because it’s a misdemeanor, they get a citation. They get a ticket,” he said in 2020.

From 2009 to 2014, businesses in California reported a steady rate of shoplifting incidents, according to the Independent Institute’s analysis of justice department data. And in 2015, reported shoplifting incidents jumped by 11 percent. Lawrence pointed out, however, that the true number of incidents is hard to determine because so many thefts go unreported.

The National Retail Federation found in 2018 that more than half of the states that have laws similar to Prop. 47 saw an increase in retail theft.

“None reported a decrease. It appears that … criminals understand the new threshold and have increased their thefts to meet it,” according to the survey (pdf).

Retailers have reported that gangs have become more aggressive and violent than in years past, the survey says. About 65 percent of respondents noted the increase in violence, while 37 percent said organized retail crime gangs were much more aggressive than in the past.

To become law, AB 1603 must be approved by California voters as a ballot measure.