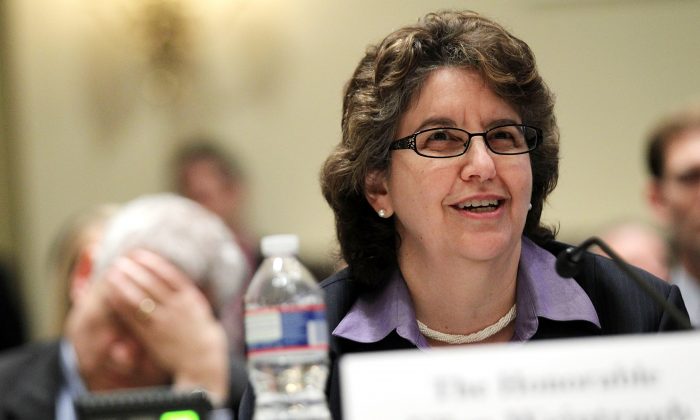 WASHINGTON—Federal Election Commission (FEC) Chairman Ellen Weintraub’s renewed feud with President Donald Trump over voter fraud allegations from the 2016 election has the ranking Republican on the House Committee on Administration asking some pointed questions about excessive partisanship within the regulatory panel.

“Recently, I believe this tone of partisanship has been amplified by some at the Commission,” Rep. Rodney Davis (R-Ill.) wrote in an Aug. 26 letter to the FEC’s leadership.

“While members of the Commission have long had principled disagreements over difficult legal questions impacting core First Amendment rights, partisan attacks only serve to undermine your work and the work of the entire Commission staff,” Davis wrote.

He also was writing on behalf of the two other Republicans on the administration committee, Reps. Mark Walker (R-N.C.) and Barry Loudermilk (R-Ga.).

Davis’s reference to a “tone of partisanship” referred to a 2016 report by the FEC’s inspector general that stated that “actions and statements Commissioners make to each other are perceived as signs of a partisan culture that is too often negative, unpleasant and adversarial.”

Davis’s letter was prompted by Weintraub’s response to Trump’s comment to reporters prior to his Aug. 15, 2019, rally in Manchester, New Hampshire, that he would have won that state in 2016 “except we had a lot of people come in at the last moment, … thousands and thousands of people, coming in from locations unknown. But I knew where their location was.”

Trump first made that claim in February 2017, saying “thousands” of people were bused into New Hampshire to vote for Clinton.

Weintraub responded in a March 2017 letter: “Our democracy depends upon the American people’s faith in our elections. Your voter fraud allegations run the risk of undermining that faith.”

Trump appointed a presidential commission on May 2017 to investigate voter fraud claims, but its existence was short, beset with controversy, and blocked by resistance from state officials. He disbanded the commission on Jan. 3, 2018.

This time around, Weintraub wrote on Twitter in response to the president, accusing Trump of repeating “unfounded claims about massive voter fraud in New Hampshire,” and releasing a letter on official FEC stationary in which she demanded of him, “Lay your cards on the table or fold.”

Weintraub repeated her challenge to Trump during subsequent media interviews, including one on CNN in which she claimed there is no evidence of such fraud anywhere in the 2016 contest or historically in America.

In his letter to the FEC, Davis requested answers no later than Sept. 20 to more than two dozen questions, including five directly related to whether Weintraub or any FEC commissioner can use official resources in “rebutting” officials or candidates in an election campaign or asking an official to release information to the public that is not required to be made available.

They added that they “are using their oversight role to ensure that these agencies are fulfilling their purpose to create free, fair, and safe elections where American votes are counted and protected.”

Charges of voter fraud have a rich history in U.S. elections, stretching back to the 19th century with the infamous “Boss Tweed” and the Tammany Hall political machine that controlled New York City elections for decades.

Similarly powerful political machines have operated in the decades since Tammany, including some Republican but most Democratic, in other big cities such as the Daley machine that ruled Chicago into the 1980s.