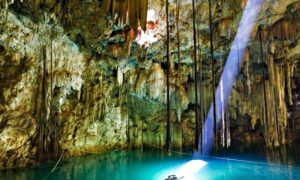 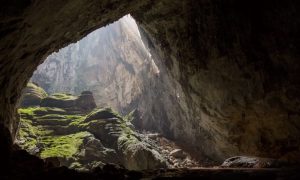 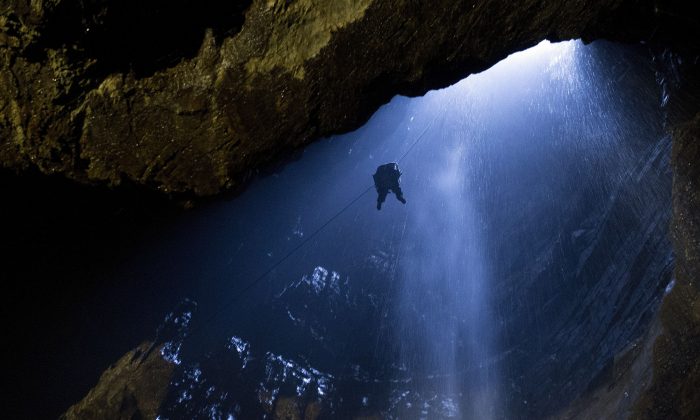 A member of the public is winched to the surface after visiting the Main Chamber of Gaping Gill, the largest underground cavern in Britain naturally open to the surface, near Ingleton, northern England, on May 26, 2015. (Oli Scarff/AFP/Getty Images)
Environment

Have you ever enjoyed the cool refuge that an underground cave offers from a hot summer’s day? Or perhaps you have experienced the soothing warmth when entering a cave during winter?

When descending into a cave, you may not only enjoy the calm climate, you may also admire the beauty of cave deposits such as stalagmites, stalactites and flowstones, known by cave researchers as speleothems.

Perhaps you already know that they grow very slowly from minerals in the water that drips off or over them. This water originates from rain at the surface that has travelled through soil and limestone above, and seeped into the ground and ended up in the cave.

As speleothems grow, they lock into their minerals the chemical signatures of the environmental and climatic conditions of the time the rainwater fell at the surface. So, as a stalagmite grows, the surface climate signature is continuously trapped in the newly created layers.

Some very old stalagmites hold climatic signatures of the very distant past, in some cases up to millions of years. They contain an archive of the past climate as long as their age, often predating global weather station records.

But if a cave remains cool during summer and warm during winter, how is its climate related to that of the surface? And how does this affect the chemical signature recorded by speleothems?

During the experiments, the surface and the cave climates were measured in detail. For example, highly accurate temperature sensors were used to measure the water temperature at the surface, and at the point where water droplets hit the cave floor forming stalagmites.

The research team initiated controlled dripping in the cave by irrigating the surface above the cave with water that was cooled to freezing point to simulate rainfall.

The cold water allowed us to determine whether the drip water in the cave is affected by the conditions at the surface or those along its pathways through the ground.

We also added a natural chemical to the irrigation water, which allowed us to distinguish whether the water in the cave originated from the irrigation or whether it was water already present in the subsurface.

This Cave May Hold Clues to Future Climate Change

Our results revealed a complex but systematic relationship between the surface and the cave climate. For example, surface temperature changes are significantly reduced and delayed with depth.

We also discovered that air moving in and out of the cave can cool cave deposits by evaporating water flowing on the cave deposits. This cooling can significantly influence the chemical signature trapped in the cave deposit and create “false” signals that are not representative of the surface climate.

In other words, it will make the surface climate “look” cooler than it actually was, if not accounted for. While this is more likely to occur in caves that are located in dry environments, it may also have to be considered for stalagmites in caves that were exposed to drier climates in the distant past.

Our new knowledge can also help scientists select the best location and type of stalagmite for the reconstruction of past climatic or environmental conditions.

This new discovery is significant because it can improve the accuracy of past climate signals from cave deposits. It may also help us understand previously unexplained artifacts in existing past climate records. By improving our understanding of the past climate we can better understand future climate variations.

Gabriel C. Rau is an associate lecturer in groundwater hydrology at UNSW Australia. Andy Baker is director of the Connected Waters Initiative Research Centre at UNSW Australia. Mark O. Cuthbert is a research fellow in hydrogeology at the University of Birmingham in the U.K. And Martin Sogaard Andersen is a senior lecturer at UNSW Australia. This article was previously published on TheConversation.com.