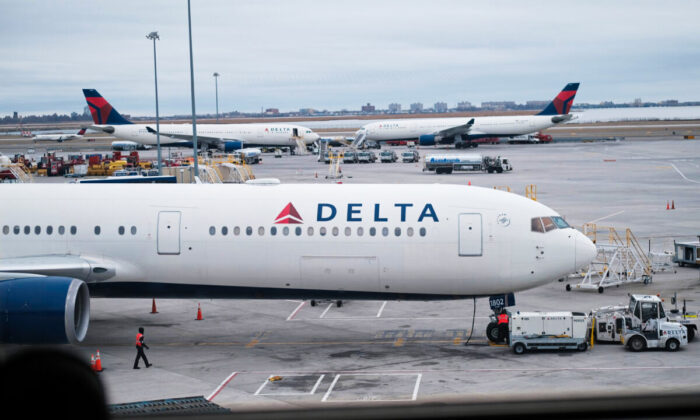 To hear it from Delta Air Lines, happy days are here again, with travelers gladly paying sharply higher fares just to get on an airplane and go somewhere this summer.

Delta said Wednesday that it expects second-quarter revenue will be back to pre-pandemic 2019 levels, even with fewer flights. The airline said revenue per seat should be up to 8 percentage points better than it originally expected.

However, the Atlanta-based airline is facing surging prices for jet fuel. Other expenses—primarily labor—are spiking too. Delta expects non-fuel costs to soar up to 22 percent above 2019 levels on a per-seat basis, more severe than a mid-April forecast of 17 percent.

With the mixed outlook, Delta shares closed down 5 percent, and other airlines stocks also fell more than the broader market.

Heading into summer, travelers are paying more for any type of seat, from basic to premium, Delta CEO Ed Bastian said during an investor conference.

“We expect pricing this summer to be up probably somewhere between 25 percent and 30 percent on average,” Bastian said. “We’ve never seen anything of that scale.”

It’s not hard to find people on social media complaining about high fares, but airline executives scoff at the notion that the current prices could scare away customers.

Speaking later at the same investor event, United Airlines CEO Scott Kirby said fares are only back to where they were in 2014, after adjusting for inflation. Besides, he said, travel demand has proven to be unaffected by price.

“It you’re worried about pricing destroying demand, you are betting against history,” Kirby declared.

The surprisingly strong rebound in air travel this year has allowed airlines to push fares higher but also left them struggling to handle the crowds with fewer workers than they had before the pandemic. Staffing issues contributed to widespread cancellations and delays over the Memorial Day holiday period.

Bastian said Delta’s corps of 12,000 pilots is big enough, but it will take eight to 12 months to train new hires and current ones who will replace the 2,000 senior pilots who retired or quit during the pandemic.

The CEO said the airline—which last week trimmed its planned summer schedule by up to 3 percent—is building more time between flights and tweaking its schedule at the Atlanta airport to run a smoother operation.