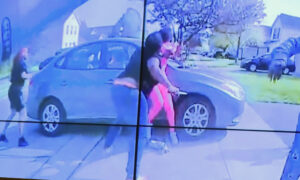 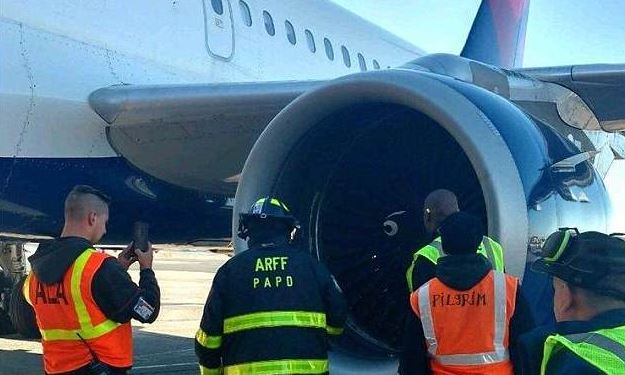 Officials inspect a jet turbine of Delta Flight 2836 which was grounded after it struck a bird on March 7, 2018 (Port Authority Police)
Crime and Incidents

A Delta flight was forced to make an emergency landing over the weekend after hitting a bird on its way to Denver on Saturday, March 7.

Delta Flight 2836 took off from John F. Kennedy International Airport in New York City just before 8 a.m. but pilots landed the jet at the same airport a short time later after a bird got sucked into one of its engines at around 500 feet, reported the NY Daily News.

The impact caused the engine to malfunction.

Of the 126 passengers on board, none were injured, according to officials.

The Port Authority Police Department’s Aircraft Rescue Firefighter Unit rushed to meet the plane on the runway and help inspect the damage after the plane landed.

Passengers were eventually transferred to another plane to complete the flight after the setback.

Officials were unclear on what kind of bird it was.

The Federal Aviation Administration says that hundreds of “bird strikes” occur at JFK every year.

Bird populations have been increasing in the United States, according to an official from the agency, leading to more accidents.

“The bird populations, particularly the large birds, have been increasing dramatically, because of actions in the U.S. to stop using pesticides like DDT, and cleaning up waterways,” James White told The New York Times. “The Canada goose population has been increasing at 8 percent a year for the last 20 years.”

The situation led officials to take drastic action in the form of bird-culling programs. The programs started in 2009 after a passenger jet lost power in two engines after striking a flock of Canada geese, forcing the pilot to make an emergency landing on the Hudson River. The dramatic incident, in which nobody was killed and only a few of the 155 passengers were injured, has since come to be known as the “Miracle on the Hudson.” A movie starring Tom Hanks was also made based on the event.

Nearly 70,000 birds, including gulls, starling, and geese, were killed from 2009 through 2017 at airports in the New York City area, reported The Associated Press. JFK, LaGuardia Airport, and Newark Airport serve passengers in the area.

Though some support the programs, others are against them, suggesting other methods may be more fruitful.

“There has to be a long-term solution that doesn’t rely so extensively on killing birds and also keeps us safe in the sky,” said Jeffrey Kramer, of the group GooseWatch NYC.

Officials admitted that even with the culling, strikes do happen.

“We do our best to reduce the risk as much as possible,” said Laura Francoeur, the chief wildlife biologist at the Port Authority of New York and New Jersey, which oversees the airports. “There’s still a lot of random chance involved.”