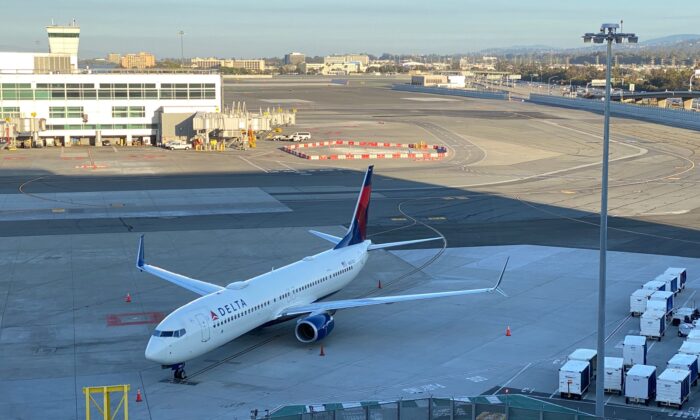 A Boeing 737 of Delta Airlines is seen parked at San Francisco International Airport in San Francisco, Calif., on Aug. 2, 2020. (Daniel Slim/AFP via Getty Images)
US News

The new policy will start this weekend and run past the Jan. 20 inauguration of President-elect Joe Biden.

“We’re going to not allow anyone to check a firearm into any of the metro D.C. airports,” CEO Ed Bastian said on CNBC’s “Squawk Box.”

Exceptions will be made for law enforcement officers who are authorized to carry weapons.

“We’re all on high alert based on the events over the last couple of weeks up in Washington,” Bastian added.

Because of the Jan. 6 breach of the U.S. Capitol, tens of thousands of National Guard troops have been deployed to the nation’s capital, along with other law enforcement officials. President Donald Trump declared an emergency around the inauguration, enabling a heightened security presence in the days leading up to the swearing-in.

Another airline, American Airlines, said last week that it was suspending liquor sales on flights in and out of Washington in light of the breach.

“At American, safety is our highest priority. We are working closely with local law enforcement and airport authority partners to ensure the safety of our customers and team members on the ground and in the air,” a spokesperson told news outlets. “We have also increased staffing at DC-area airports as a precautionary measure and will not be serving alcohol on flights to and from this area.”

Instead of using a variety of methods, including warnings and civil penalties, the agency will only pursue legal enforcement action against any passengers who assault, threaten, intimidate, or interfere with airline crew.