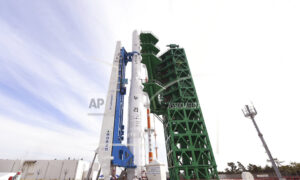 The Delta Aquarids Meteor Shower is basically here, starting on July 12 and running all the way through August 23.

The meteor shower is slated to peak on July 28 and July 29.

“This year’s peak occurs during a new moon, which means dark skies for optimal viewing. Begin looking for these faint meteors after midnight,” according to NASA.

Overall, the meteors part of this shower are difficult to spot but the number of meteors visible will increasingly rise until the peak hits.

“Lie flat on your back and look up, taking in as much of the sky as possible. However, looking halfway between the horizon and the zenith, and 45 degrees from the constellation of Aquarius will improve your chances of viewing the Delta Aquarids,” NASA advises. “In less than 30 minutes in the dark, your eyes will adapt and you will begin to see meteors.”

July and August are notable for meteor showers because there’s two additional ones at the same time as the Aquarids.

The Alpha Capricornids run from July 11 through August 10 and peak on July 28 and July 29. There aren’t many meteors but a number of bright fireballs are produced by the shower.

The Perseids shower also runs during this time, from July 13 through August 26. The peak is on August 11 and August 12. This shower is known as one of the more popular ones because there’s lots of meteors and they’re easy to see.