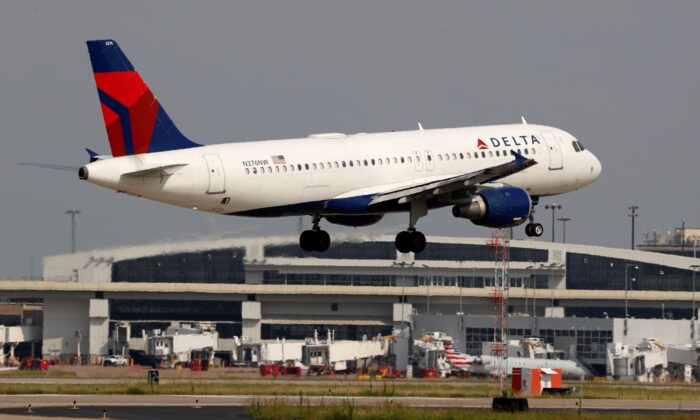 Delta Air Lines remains a major U.S. carrier that has chosen not to mandate COVID-19 vaccines for all its employees, although it does require all new U.S. employees to be vaccinated, and that all unvaccinated Delta staff enrolled in its health care plan pay a $200 monthly surcharge.

In an interview with Fox Business, Bastian said he wanted to avoid a mandate that would push unvaccinated employees of the roughly 80,000 workforce out of the company.

The Atlanta-based airline’s CEO said over 90 percent of employees have been vaccinated so far and that he expects 95 percent will have reached vaccination status by early November.

“The reason the mandate was put in by the president, I believe, was because they wanted to make sure companies had a plan to get their employees vaccinated,” he said. “A month before the president came out with the mandate, we had already announced our plan to get all of our people vaccinated. And the good news is the plan is working.”

Bastian noted that religious and medical accommodations will need to be made for employees who wish to remain unvaccinated without employees having to risk losing their jobs.

“By the time we’re done, we’ll be pretty close to fully vaccinated as a company without going through all the divisiveness of a mandate,” he said. “We’re proving that you can work collaboratively with your people, trusting your people to make the right decisions, respecting their decisions and not forcing them over the loss of their jobs.”

Bastian also praised the company for recording 116 “perfect days” with no cancellations this year across Delta’s mainline and regional operations, putting the airline on par with pre-pandemic levels.

“Delta’s done a great job all year long with making certain that we’re managing supply and demand in equilibrium,” he said. “I can’t give enough thanks to the Delta team, providing a great product for our customers and it’s one of the reasons we were profitable this quarter.”

Multiple airlines have mandated vaccines for employees, with United Airlines being the first U.S. carrier to do so, announcing the mandate in August. United Airlines confirmed on Sept. 29 that it was going to terminate 593 of its employees who have chosen not to comply with the company’s vaccine mandate.

Workers at multiple airlines across the United States last week protested against COVID-19 vaccination mandates after numerous carriers announced employees must get vaccinated or risk losing their jobs.

American Airlines told workers in an email on Oct. 6 that they have to be fully vaccinated by Nov. 24 or face termination.

Hundreds of American Airlines workers—including pilots and flight attendants in uniforms—took to the streets outside the company’s Fort Worth, Texas headquarters on Thursday to protest against the new measures, The Dallas Morning News reported.

Southwest Airlines (SWA) also announced it will require all of its 56,000 U.S. employees to be vaccinated against COVID-19.

The Southwest Airlines Pilots Association (SWAPA), a union, announced on Oct. 5 that it would be filing a temporary restraining order against SWA to stop the company from carrying forward its mandate. The order forms part of a lawsuit that SWAPA filed on Aug. 30 challenging forced time off and other changes to working conditions imposed by the airline during the COVID-19 pandemic.

Many of them brandished signs reading “Mandates won’t fly” and “Don’t fire my Dad” in response to the new rules, while some protesters said they were skeptical of the effectiveness of the vaccine and concerned about side effects.

On Monday, Boeing told employees they must be vaccinated against COVID-19, a spokesperson confirmed.

Employees must be vaccinated by Dec. 8 in line with the deadline set by Biden requiring federal employees as well as companies that are contractors and subcontractors of the government to receive the shots.