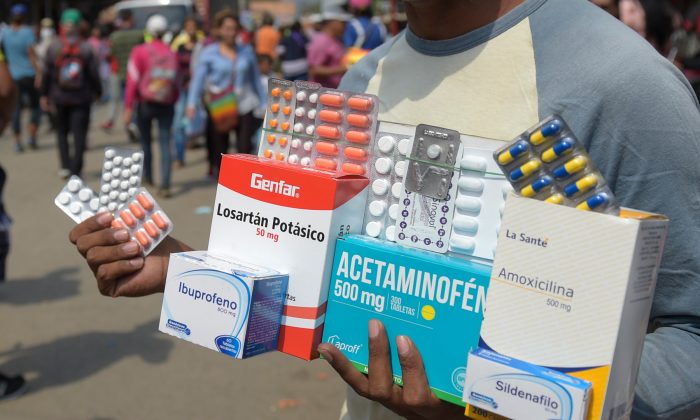 A man selling medicine on the street. (Raul Arboleda/AFP/Getty Images)
By Daniel Holl

A delivery man potentially saved a woman from committing suicide when she called him to order sleeping pills that could “poison someone,” according to Chinese online news outlet KNews.

She had reportedly had a fight with her boyfriend before attempting to place the order. After speaking with the delivery man and officers, she changed her mind.

Delivery Man to the Rescue

The delivery man received a phone call from the young female customer in the evening, according to KNews. She requested that he buy and bring some medicine to her. However, when he asked the name of the medicine, she said that she wanted sleeping pills.

The young man responded by saying that sleeping pills are a prescription medicine, and that he was unable to fulfill her request, according to KNews. One of the officers who responded to the case, surnamed Wang, said the woman then told the deliver man that “it will work to just buy medicine that will poison someone.”

Upon hearing this, the delivery man did not simply refuse her or overlook the request, according to KNews. He took down her contact information, and at the same time, found a way to contact the local police.

The police may have coordinated with the delivery man to trick the woman into thinking that he actually brought sleeping pills to her, so that they could enter her apartment. Footage from KNews shows the young man making a call to her, saying: “Hi, I’m at the elevator, you can come out and get it.”

As soon as she opened the door, police came around the corner, and appear to have invited themselves into her apartment.

At first, the girl was unwilling to speak with them, but eventually said that she had a fight with her boyfriend, and that turned her to suicidal thoughts.

After speaking to her for about 40 minutes, the woman had calmed down, and said she was not thinking that way anymore, according to KNews.

The report then said the woman was saved because of the delivery man’s quick-wits and good conscience.