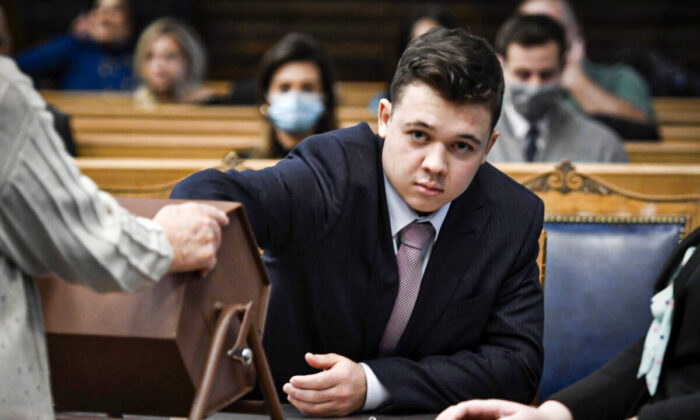 Kyle Rittenhouse pulls numbers of jurors out of a tumbler during his trail at the Kenosha County Courthouse in Kenosha, Wis., on Nov. 16, 2021. (Sean Krajacic/The Kenosha News via AP, Pool)
Judiciary

No Verdict in Rittenhouse Trial After First Day of Deliberations

The jury deliberating in the Kyle Rittenhouse trial has retired for the evening after the first day of deliberations.

Judge Bruce Schroeder retired the 12 jurors around 5:50 p.m. CT. They are set to report back to the courthouse the following morning to resume deliberations at 9:00 a.m. CT. Schroeder reminded the jurors to not discuss the case except among each other when they are all together.

On Tuesday morning, Rittenhouse himself was allowed by Schroeder to draw numbered slips of paper from a drum that determined 12 of the 18 jurors. The six extras would be dismissed as alternates.

Deliberations started at around 10 a.m. ET on Tuesday, a day after closing arguments were made by prosecutors and Rittenhouse’s defense attorneys. Rittenhouse has pleaded not guilty for shooting two men and wounding another during a night of riots, protests, and arson attacks in Kenosha, Wisconsin, on Aug. 25, 2020, arguing that he acted in self-defense.

Rittenhouse, who was 17 during the time of the shooting, faces five felony charges. The most serious charge carries a mandatory sentence of life in prison.

Pages 2 and 3 of the jury instructions pertain to self-defense and provocation, while page 4 focuses on criminal statutes requiring the intent to kill. Pages 5 and 6 focus on the charge of first-degree reckless homicide in the fatal shooting of Joseph Rosenbaum.

Assistant District Attorney Thomas Binger on Monday argued that Rittenhouse set the deadly chain of events in motion by bringing a semi-automatic rifle to a protest and menacing others, then walked off like a “hero in a Western.”

However, Rittenhouse lawyer Mark Richards countered that Rittenhouse was ambushed by a “crazy person” he feared would wrest away his gun and use it to kill him, referring to Rosenbaum. Other than Rosenbaum, he shot and killed Anthony Huber, 26, and wounded Gaige Grosskreutz, now 28.

Last week, Rittenhouse waived his Fifth Amendment rights and testified, asserting that Rosenbaum chased him and attempted to grab his rifle. His testimony was largely corroborated by video footage of the incident as well as witnesses called up by the prosecution.

Huber was then shot when he struck Rittenhouse with a skateboard, also captured on camera. Grosskreutz, meanwhile, testified that he pointed a handgun at Rittenhouse before he was shot.

On Monday, Schroeder dismissed a misdemeanor charge against the teenager for illegally possessing an AR-15-style rifle that he used in the shooting. Schroeder argued that the Wisconsin statute on possession was unclear.

On Tuesday, the Kenosha County Sheriff’s Department issued a statement saying that it currently saw no need to enact a curfew or shut down roads due to potential unrest or violence following the verdict.