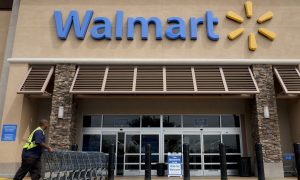 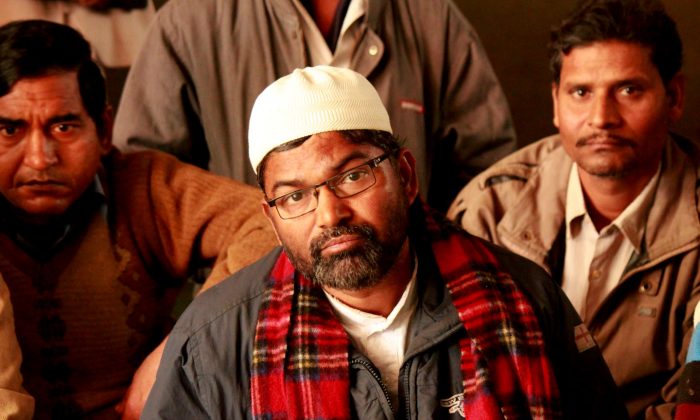 Iattar Hussain, a street vendor who sells old clothes and old leather jackets, attends a meeting of the street vendors and hawkers of Delhi on Jan. 6, 2015. Hussain was a one of 500 vendors who protested Walmart's expansion outside of the company's corporate offices in Gurgaon city of Delhi on Nov. 19, 2014. (Venus Upadhayaya/Epoch Times)
India

NEW DELHI—Walmart India Private Limited is about to open it’s 21st store near the Taj Mahal in Agra, India, and street vendors, who sell similar goods as Walmart, are protesting the move, saying it will take away their business.

Under Indian FDI laws, the retail giant is allowed to open wholesale stores that sell only to businesses like street vendors, hotels, offices, and restaurants. Customers must have a photo ID to enter, and there is a mandatory minimum purchase so that individuals will not take advantage of the cards.

In theory, this should prevent people from shopping at Walmart like a retail store, but street vendors say that it is easy to sidestep these barriers.

“Poor people are connected with small markets and this big fish [Walmart] is ready to eat it.”
— Gulshan Kumar, Street Vendor in Delhi

“Entry into a store is only for members who are offered a photo-entry card, but these cards are easily transferable to others and are being used for individual purchases,” said Dharemdra Kumar, the working president of the National Hawker’s Federation of India.

Not only does Walmart not closely check the photo on the ID, Dharemdra says that every member is given two additional cards. While there is still a minimum purchase amount, it is so low that it doesn’t act as much of a deterrent.

“Cards are also being given to jewelers when Walmart sells no jewelry,” he said. “I have been inside one Walmart store using a jewelers card.”

Dharemdra says the global retail giant is actually running a retail chain under the guise of a wholesale store, and if enough people take advantage of their lax oversight, this could seriously hurt vendors’ business.

It’s for these reasons that more than 500 hawkers and vendors from Delhi protested outside Walmart India’s corporate offices in Gurgaon, a city in the National Capital region on Nov. 19. Over ten countries held similar protests to bring attention to the poor working conditions in Walmart’s stores and supply chain, and the low wages Walmart pays its employees.

Five of the hawkers met with a representative from Walmart and submitted a letter asking Walmart not to build stores closer than two miles near a vendor market, among other demands for better working conditions for their employees.

According to Dharemdra, Walmart promised to respond to the hawkers requests in a few weeks. When Epoch Times contacted Walmart over a month later asking if they planned to issue a response and what it would be, the company dodged the question entirely.

“Our team is currently working towards procuring all relevant licenses and permits to have it [the new store] up and running in due course,” a spokesperson replied in an email.

“While growing our India business, we will continue to invest in supply chain infrastructure and supplier development, especially helping the growth of small & medium manufacturers in India and make important social, economic and environmental contributions to the country.”

The statement went on to say that it’s mission is to “enable small business to prosper,” a statement Gulshan Kumar, a 52-year-old street vendor in west Delhi flatly disagreed with. He called Walmart “a big fish” preying on small fish, the local merchants.

“Poor people are connected with small markets and this big fish is ready to eat it,” he said.

According to government data from 2007-2008, retail is one of the largest employers in India, second only to agriculture, and vendors worry that with Walmart planning to open another 50 stores over the next 4-5 years, the industry will have to downsize as the local sellers won’t be able to compete with Walmart’s prices.

Gulshan says this will be hard on the industry as the majority of street vendors are not highly skilled and would have trouble finding another job.

“The illiterate, unskilled, poor person—where will they go?” he asked.