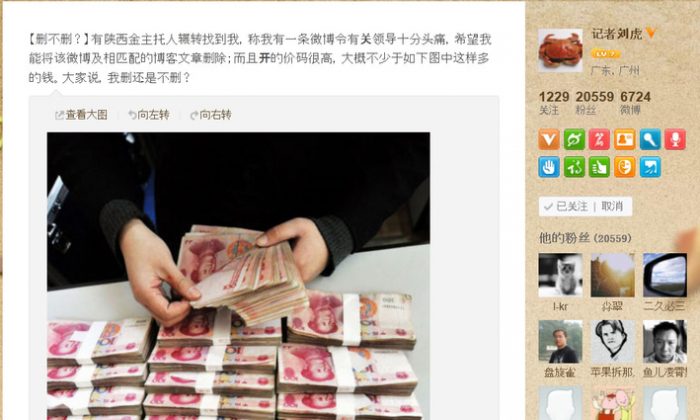 A source told The Epoch Times that PetroChina’s investigators learned that the corruption in Sichuan Petroleum & Chemical was worse than the public had imagined. Because it involved executives in PetroChina with high connections, the investigation had to stop. Instead, PetroChina paid to have all online postings about the scandal deleted.

The Epoch Times learned that in order to delete all the posts about the scandal, PetroChina has so far spent 37 billion yuan ($5.9 billion). It is estimated that the total cost of deleting the posts will exceed 50 billion yuan ($7.98 billion). The implicated official is said to be of much higher rank than the CEO of PetroChina. The scandal reaches the highest level of Chinese politics.

Boxun, a Chinese-language website outside China, reported that a high-level manager at a popular Internet public relations company said the main source of income for Internet forums and blog sites is not advertisements but deleting posts.

Liu Hu, a reporter for the Guangzhou-based New Express Daily, wrote on his Sina microblog on Oct. 14, “A gold mine owner in Shaanxi Province sent me a message. He asked me to delete one of my blog posts and all related articles, because the post has been a headache for certain high-ranking officials. In return, I will be paid handsomely—as much money as in the attached picture. My friends, should I delete or not delete?”

The headache-inducing blog post on sohu.com is “Shaanxi Province Disciplinary Inspection Committee gives free coal mine.” Wang Erxiao, from Fugu in Shaanxi Province, ran a coal mine with an official who retired in 1979. Wang held one-third ownership.

The two disputed the ownership arrangement and fought county, city and provincial lawsuits. Wang lost all the lawsuits.

Liu’s Weibo post attracted much attention. Fu Liang, a communications analyst from Beijing wrote, “let’s dig around for this valuable blog and repost it so that we all can get rich.” Many others echoed his suggestion.

Because of the rapid development of the Internet, deleting negative content on portals, chat rooms, forums, video and audio sharing sites, wikis, blogs and search engines is an emerging business. Some companies that delete posts offer a “lifetime guarantee” on deleted content, according to an Aug. 6 report by Southern Metropolis Daily.

An experienced “deleting posts” professional told Southern Metropolis Daily that the standard of deletion charges depends mainly on the type of websites, and the popularity of the post.