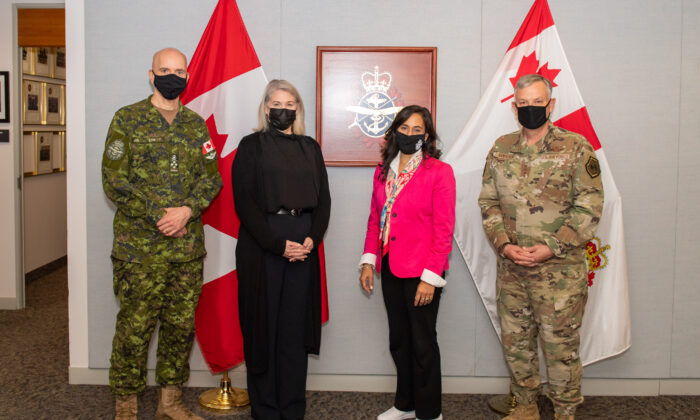 The commander of the Canadian-American defence alliance NORAD is warning Canadian officials that delays in modernizing the North American Aerospace Defense Command’s early-warning system will leave the continent vulnerable to threats from China and Russia as the regimes develop new military technologies.

U.S. Gen. Glen VanHerck made the comment to reporters on Nov. 30 during his first visit to Ottawa after taking over as the commander of NORAD in August 2020.

VanHerck’s remarks come amid growing concerns about China and Russia’s development of long-range cruise missiles and hypersonic weapons that have the ability to strike North America.

“The North Warning System is designed for a threat from 50 years ago,” VanHerck said. “A bomber that has to fly over the North Pole to drop gravity weapons, has to fly over Canada and North America into the United States to drop any of those weapons.”

Military officials have warned that the string of NORAD’s 1980s-era radars responsible for detecting an attack on North America is no longer capable of detecting modern threats, a message VanHerck says he repeated to Canadian officials while in Ottawa.

“North America is only going to become more vulnerable to future capabilities being developed by potential adversaries,” he said. “And decisions need to be made in the not-too-distant future. So I’d love to see those happen sooner than later.”

Political direction is needed to establish a framework in which each country will lay out its requirements and boundaries for a new system, such as whether the new system will include actual defensive measures to intercept incoming attacks.

VanHerck said his latest discussions in Ottawa with Defence Minister Anita Anand, chief of the defence staff Gen. Wayne Eyre, and other Canadian officials did not involve specific policy decisions but were intended for him to update them on the current threat environment.

Such weapons are extremely difficult to detect and intercept due to their unique launch system and ability to be manoeuvred, which leave military and political decision-makers little time to come up with an appropriate response.

VanHerck said while China has yet to actually field hypersonic weapons, Russia has had them in its arsenal for years.

Canada and the United States have pledged to upgrade the continental defence system, including a joint statement on NORAD’s modernization issued by Canada’s former Minister of National Defence Harjit Sajjan and the U.S. Secretary of Defense Lloyd Austin in August.

The statement said areas where new investments in modernization should prioritize include situational awareness, command and control systems, deterrence capabilities, and research and development.

Experts have estimated the updates to cost billions, with Canada sharing 40 percent of the total expanse. VanHerck said he has some preliminary cost estimates, but refused to reveal the numbers until a decision is made on a specific modernization plan.

VanHerck said his priority for an update would be building a detection system that will give military and political officials time to respond to an attack. Data collection and intelligence from around the world would be required to achieve this.