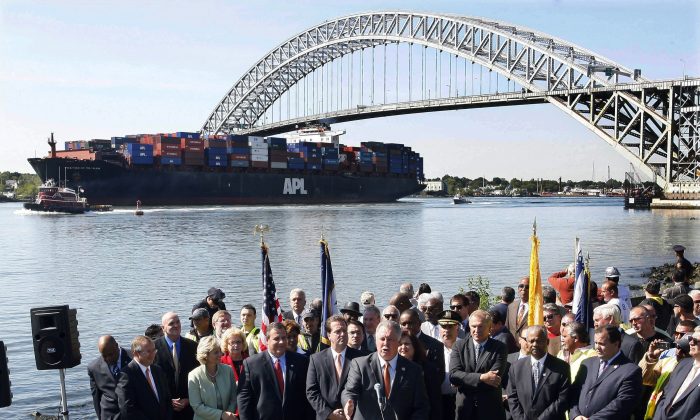 FILE - In this Sept. 21, 2010, file photo, the President Truman, a large cargo ship, passes under the Bayonne Bridge in Bayonne, N.J., as a group, including New Jersey Gov. Chris Christie and Lt. Gov. Kim Guadagno, listen to U.S. Rep. Albio Sires, D-N.J., talk about plans of a $1.3 billion project to raise the height of the bridge to give the larger, next generation of cargo ships access to New York and New Jersey ports. Delays on a project to raise the Bayonne Bridge could lead to other East Coast ports losing out on larger cargo vessels that are expected to begin passing through an expanded Panama Canal next spring. (AP Photo/Mel Evans, File)
New York

NEWARK, N.J.—Delays on a project to raise a bridge in New Jersey by 64 feet could lead to other East Coast ports losing out on larger cargo vessels expected to begin passing through a newly expanded Panama Canal next spring.

The $1.3 billion Bayonne Bridge elevation, aimed at accommodating the bigger vessels and their larger cargo capacity, initially was to be completed in 2016. But this month, the Port Authority of New York and New Jersey announced it wouldn’t be done until late 2017 because of construction delays related to weather and structural problems with the bridge’s steel.

That raised questions about whether the Port of New York and New Jersey, the East Coast’s busiest port, would lose business to other ports that already are prepared for the larger ships.

In response to questions about the bridge delay, the Port Authority said in an emailed statement to The Associated Press that it has discussed the issue with carriers and terminal operators and that “other East Coast ports will receive larger ships only after the Bayonne Bridge Roadway is raised.”

At least one ship carrier appears to corroborate the claim. But it was news to officials at the ports of Baltimore and Virginia, the two East Coast ports that are expecting to receive the larger ships next year.

“We have not been told by any ship owner that the status of the Bayonne Bridge will have a direct impact on the Port of Baltimore receiving supersized ships,” said Richard Scher, spokesman for the Maryland Port Authority.

Joe Harris, a spokesman for the Virginia Port Authority, said he hadn’t been informed about shipping changes due to the Bayonne Bridge delay.

“Having one port ready doesn’t help, really,” he added. “You need all the ports ready.”

A spokeswoman for Evergreen, a major container ship carrier serving the East Coast ports, said the issue is driven by economics.

“There is not an agreement per se to not have the mega ships call on the East Coast until the Bayonne Bridge project is complete,” Barbara Yeninas said in an email. “Rather, most carriers would not place a mega vessel on the East Coast if they cannot call at New York/New Jersey, which is the most fertile marketplace. So it is not an agreement but rather a commercially driven decision.”

Representatives of Maersk and CMA CGM, two other major shippers, didn’t provide answers to questions about their plans.

The potential economic cost of a delay is unclear. Port Authority officials in New York have said the bridge-raising and other improvements could help double the volume of cargo passing through the port in the next 10 years. Officials in Virginia are forecasting continued growth on top of a record year in 2014, Harris said.

Lawrence Gross, a consultant with FTR, a freight transportation research and forecasting firm, agreed that it makes sense for companies to wait until New York–New Jersey is online before sending the larger ships.

America Is Literally Falling Apart: 61,000 Bridges in Need of Repair

Mysterious White Flags Atop the Brooklyn Bridge Were Bleached

“The local New York–New Jersey market is so huge that you can’t ignore it,” he said. “It’s sort of like going on a tour of New York State and ignoring New York City. It’s a must-make stop, if you look at the sheer population that’s served by that port.”

The bigger ships coming from Asia through the Panama Canal are expected to provide a boost to eastern U.S. ports. Currently, the canal can handle ships with space for 5,000 cargo containers, or Twenty-foot Equivalent Units (TEU), each of which takes a tractor-trailer to haul. The expanded canal will be able to accommodate ships with capacity up to 13,000 TEU, and a 2013 U.S. Department of Transportation study estimated the amount of cargo passing through the canal will double.

Eastern ports including New York–New Jersey can already handle ships with 8,500 to 9,000 TEU that come through the Suez Canal or from Europe. But they have spent billions over the past several years on projects to deepen channels and expand capacity in anticipation of the larger ships.

The Bayonne Bridge elevation initially was expected to be completed next year, and Port Authority officials even gave a more optimistic prediction in 2012 when they announced that part of the project would be finished six months ahead of schedule.