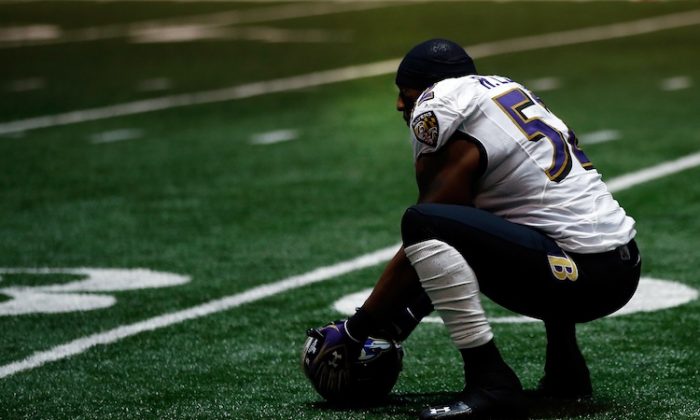 Ray Lewis and the Ravens watched their momentum slip away during the 34-minute power outage, only to make a last-second defensive stand to wrap up the Super Bowl. (Chris Graythen/Getty Images)
NFL

There have been few times in sports history where an unforeseen/bizarre event has delayed and/or altered such a significant match. There was the earthquake that nearly derailed the 1989 World Series. There was the parachute jumper that landed in the middle the Bowe/Holyfield II fight in 1993.

While Oakland won the two games right before and then immediately following the earthquake to sweep the Giants and Holyfield kept his momentum going despite the parachutist fracas in the seventh round, Sunday’s Super Bowl power outage delay nearly altered history. Baltimore had the game well in hand as the lights went out—prematurely.

Jacoby Jones’s 108-yard second-half-opening kickoff return seemed to leave little doubt that this was Baltimore’s day, putting the Ravens ahead 28–6 with momentum clearly in their corner. Baltimore had come out of the locker room ready to win, meanwhile San Francisco’s biggest weapon—Colin Kaepernick—looked out of sorts on the biggest of stages.

But the 34-minute delay killed all momentum.

The Ravens, wondering when the game would resume, were forced to sit there, stand there, stretch there, and not look at the scoreboard and resist thinking about how close they were to the NFL’s biggest prize.

Normally, there’s no such time to stop and wonder once the game starts. The coach gets the team ready with a motivational pregame locker room speech and from then on it’s nonstop action until the final whistle sounds. Even halftime is at a frantic pace as the players and coaches hurry to get in the locker room, make their schematic adjustments, and get back on the field for the next half.

On the other side, the Niners had to be grateful. When the bleeding starts, it’s tough to stop. They came out a little flat and couldn’t find their ground—especially their quarterback.

Kaepernick’s speed had done little for him in the first half, and his passes and decision-making ability just weren’t there.

At his best, few can stop him. Passes shoot off his hand like bullets, letting him put the ball in almost any spot. Meanwhile, if there’s no one open he has no problem exiting the pocket and immediately turning into Barry Sanders with the ball.

Even the defense, which allowed just over 17 points per game in the regular season, was already above their season average by the second quarter. They looked especially silly on Jacoby Jones’s 56-yard touchdown pass where he got behind the defense, fell down to catch the ball, got up, and eluded two defenders for the score.

But the delay seemed to hit San Francisco’s reset button and calmed Kaepernick down.

After he was given new life, he was a new quarterback with nothing to lose and it showed. The Niners gained 260 of their 468 yards after the delay and it likely would have been more had two of their drives not started inside Baltimore’s 25.

Their other three drives each went for 75 or more yards and had Kaepernick gotten a holding call on fourth-and-goal at the 5, he likely would have been headed to Disneyland after the game.

Instead, he’ll likely be the starting quarterback for everyone’s 2013–14 preseason pick to win the Super Bowl.