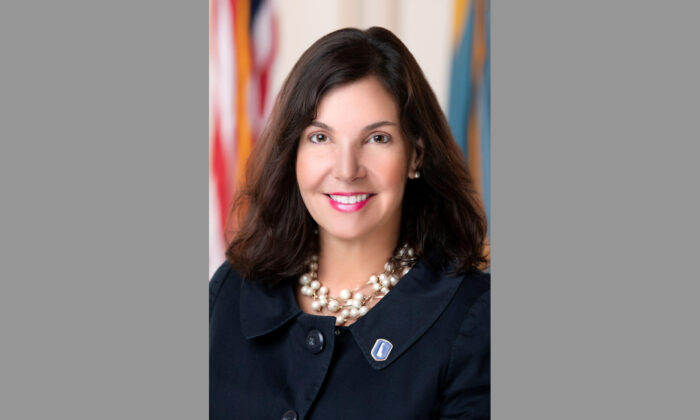 The top Delaware official in charge of rooting out government fraud and abuse was indicted on Oct. 11 on public corruption charges.

State prosecutors charged Delaware Auditor of Accounts Kathleen McGuiness with felony counts of theft and witness intimidation as well as three misdemeanor counts, according to an indictment (pdf) made public on Monday.

Among other allegations, McGuinness is accused of hiring her daughter and the daughter’s friend for temporary jobs at a time when other temp workers were let go due to lack of work amid the pandemic. The daughter and the friend were paid $19,000 and $7,700 respectively. Some of the payments took place when after the auditor’s daughter, Elizabeth McGuiness, enrolled in a college.

McGuiness’s attorney, Steve Wood, said in an email that McGuiness is “absolutely innocent,” and the indictment is “full of misleading statements and half-truths.”

When employees at McGuiness’s office discovered and reported the misconduct, McGuiness used her position to monitor the employees’ emails and to intimidate the whistleblowers, the indictment alleges.

“The indictment includes a great deal of evidence that the state auditor repeatedly broke the law and systemically abused her power, beginning in her first year in office,” Attorney General Kathy Jennings, a fellow Democrat, said in a statement.

“Our investigation revealed a long trail of corruption, nepotism, official misconduct, intimidation, and fraud that implicated thousands of taxpayer dollars—all from an elected official who is supposed to be a watchdog for exactly this kind of misbehavior.”

The defendant’s lawyer said Delaware law does not prohibit family members from hiring family members, and there have been such instances throughout state government, including in the attorney general’s office. He also said the contractor McGuiness hired has performed policy development services for other elected officials in Delaware, and that all of the relevant contracts were “entirely lawful.”

“The witness intimidation charge is pure fiction, and is clearly the result of fanciful tales spun by former employees with an axe to grind,” Wood said. “Ms. McGuiness will continue to work hard on behalf of Delaware’s taxpayers and intends to focus on the job that she was elected to do.”

The authorities also charged McGuiness with setting up a no-bid contract for just under $50,000 with a company she used as a campaign consultant when she ran for lieutenant governor in 2016. The contract amount and the payments under which it was executed were signed to avoid reporting thresholds, the indictment alleges.

When McGuiness approached the same firm again in September 2020 with a second offer for a contract just under $50,000, the firm said they’d prefer to proceed with a public bidding process. Another company won the bid and received a $77,500 payment.

The yearlong investigation is still ongoing, according to the attorney general.

The Delaware Democratic Party called on McGuiness to resign.