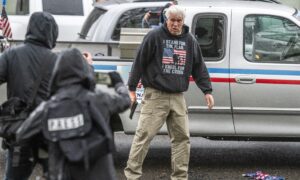 The Delaware Senate voted Thursday to require handgun buyers to get permits and training before they can purchase their firearms, joining states like New York and Connecticut, as well as a bill that would ban magazines that hold more than 17 rounds.

The measure passed in a 13–8 vote, with one Senate Democrat joining Republicans in voting against the bill. The lone Democrat to vote against the bill, Sen. Bruce Ennis, argued that the money used to operate a handgun permit system could be used to target gang activity and crime in Delaware.

“Magazines capable of feeding 30, 40, 50, or 100 rounds of ammunition into weapons are a common thread among mass shooters in the United States,” said bill sponsor Sen. David Sokola, a Democrat. “The more bullets one can fire, the more death and injury one can cause.”

“It ensures that handgun owners will have undergone firearm training courses to reduce the number of accidental shootings, suicides, and gun deaths,” said the bill’s sponsor, Sen. Tizzy Lockman, a Democrat.

But one Republican lawmaker suggested that such bans are akin to policies implemented by 20th-century authoritarian regimes, such as the Nazis.

“Hitler was legal in what he did, and it was because of legislation and legislators that paved the way for that,” Sen. Dave Lawson said, reported WHYY. “To expect people to obey this and continue this overreach of government is asking to wake up a giant that you may not want.”

Gun rights groups such as the National Rifle Association (NRA) have frequently pointed out that the 1994 “assault weapon ban”—which also barred high-capacity magazines—that expired in 2004 did not have a meaningful impact on crime. According to an Urban Institute study, “The banned guns were never used in more than a modest fraction of gun murders.” Research provided by the RAND Corporation found no evidence that banning high-capacity magazines or “assault weapons” has an effect on violent crime or mass shootings, according to the NRA.

“The terrorist attacks in France and Belgium show that gun bans—including those on semi-automatic firearms and standard-capacity magazines—don’t prevent crime. In both countries, the ownership of firearms, including semi-automatics, is severely restricted,” the group wrote.

Democratic lawmakers at the state and federal level, as well as President Joe Biden, have said that more gun laws, including ones that provide more stringent background checks, are needed after two mass shootings in Colorado and Atlanta last month.