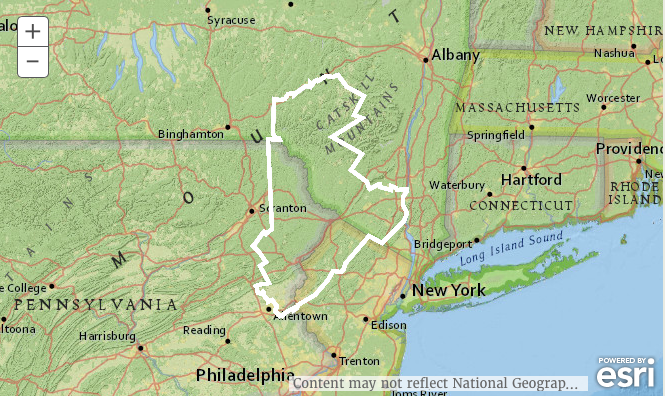 A screenshot of the map on the Scenic, Wild Delaware River website showing the region that is encompassed by the project on Nov. 6, 2015.
New York

To those who live in the middle and upper Delaware River region, it’s no secret that it has many noteworthy attractions.

That is why the National Parks Conservation Association (NPCA) and National Geographic Maps is working in partnership with stakeholders in nine Delaware River counties to build a MapGuide titled “Scenic, Wild Delaware River.”

The guide is meant to promote economic development and geotourism, defined as travel that “sustains or enhances the geographical character of a place—its environment, culture, aesthetics, heritage, and the well-being of its residents,” according to the website.

It’s the kind of publicity this beautiful area has been needing all these years.
— Susan Hawvermale, Director of Orange County Tourism

“This could be anything from a beautiful hike to a business or event that offers a real local experience,” said Geotourism Stewardship Council member Carl Wilgus, president and CEO of Pocono Mountains Visitors Bureau in Pennsylvania in a release.

The NPCA and National Geographic Maps are working with a number of community leaders called the Geotourism Stewardship Council to review nominations for the three website categories: Places to Go, Where to Stay, and Things to Do.

Charlene Trotter, executive director of the Tri-State Chamber of Commerce and one of the Council members, said the purpose of the council is to sustain the project after National Geographic and the NPCA leave in two years.

The NPCA, a non-profit that promotes and protects national parks in the U.S., got a $675,000, two-year grant through the William Penn Foundation for the project. The project is anchored around two national parks: the Upper Delaware Scenic and Recreational River and the Delaware Water Gap National Recreation Area.

The site currently has three categories: Places to Go, Where to Stay, and Things to Do.

One of the questions going forward is how the Council is going to maintain the site once the funding runs out.

“The Stewardship Council will be advised as to the best way for us to go forward to continue this site,” Trotter said, without giving details. The council is currently figuring that out, said John Beljean, a Delaware River Field Representative for the NPCA.

After nine community meetings, which the hosting organizations said had a sizable turnout, nominations are already being posted to the website.

There may be more public forums in the future, said James Dion, National Geographic Maps’ director of tourism programs, but not necessarily in the same format, and none have been planned. He estimated there would be at least two more public events before the map is finalized in May of 2016.

In the meantime, people can nominate places and events on the website DelawareRiver.NatGeotourism.com until Jan. 15, 2016.

They may leave the nomination function on the website however, said Trotter, because there will inevitably need to be some things added and things removed. “It will be a fluid type of site,” she said. “We have businesses that are going to open here locally that aren’t yet open but might have something unique that they can come and see.”

“It’s the kind of publicity this beautiful area has been needing all these years,” said Susan Hawvermale, the director of Orange County Tourism in an email. “National Geographic’s stamp of approval really elevates the region’s identity and will bring many more tourists to this jewel of a river.”