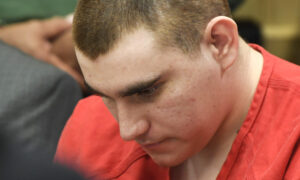 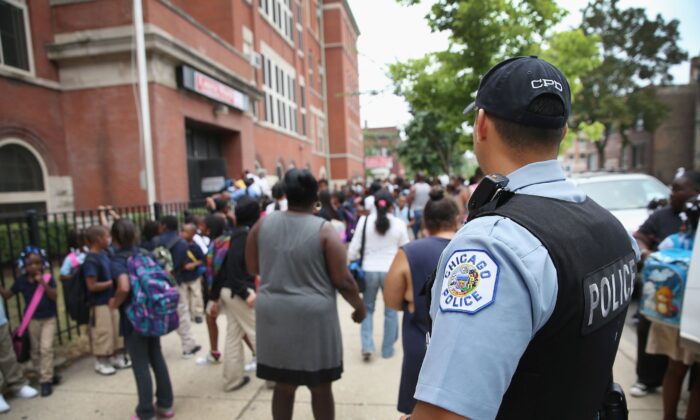 Among about 45 high schools that retain officers, eight out of 10 are in the most violent neighborhoods on the South Side and West Side of the city, and most of their student bodies are predominantly African American.

Often at the pleading of parents who live in these neighborhoods, the local school councils voted to keep one or two police officers on campus, overcoming strong and emotional opposition from teachers and activists, who argued that on-campus officers will traumatize black youths and that students will be better served if the money is spent on social programs instead.

At George Westinghouse College Prep, a public high school in the Garfield Park neighborhood on the West Side, a recent schoolwide survey shows that 90 percent of the participating parents think on-campus officers make their children physically safe and 80 percent of students think so as well.

But the attitudes shift drastically when it comes to the participating teachers and administrative staff, more than 50 percent of whom think an on-campus officer doesn’t make them physically safe.

The school has about 1,200 students. About 700 people responded to the survey.

Garfield Park has been the third most violent neighborhood in Chicago this year, with 33 people killed and 128 injured, largely due to gunfire.

Melina Lesus, a longtime English teacher at Westinghouse and a doctoral candidate at the University of Illinois at Chicago, got emotional at a virtual school council meeting on July 13.

“I do not feel safe around a police officer,” Lesus said, almost coming to tears.

She dismissed the overwhelming students’ support for on-campus officers.

“Even just one of our 1,200 students feel the same way as I do, that’s enough for us not to have an officer in the building,” Lesus said.

Andrew Johnson, a social science teacher and college adviser at Westinghouse, cited research that indicates officers on campus don’t make students safer. He argued that the school should move in the direction of restorative justice, such as peace circles that build relationships between adults and young adults.

“We did not ask them, ‘if Westinghouse had $100,000 [annual salary for two on-campus officers] to do something great for building community and emotional and physical safety, what would you do with it?’”

Marvin Simpson, a parent of Westinghouse students and the newly elected president of the Westinghouse School Council, also cited research, conducted on his own.

“The only research I know is the life I have lived,” Simpson said at the virtual meeting. “I live in Austin. I work in Austin. I’ve seen people die. The thing I do know as a parent, for my son and his friends, what they really want is to have a cop standing at the bus stop with them until the bus comes.”

Austin, just west of Garfield Park on the West Side, has been the second most violent neighborhood in Chicago this year, with 34 killed and 131 injured, mostly due to gunfire.

“Kids are nervous. They have a reason to be nervous. It’s a peace of mind to have an officer they can run to and say, ‘Hey, hit that button on your hip instead of me calling 911.’ When a police officer calls, the police come much faster. Hope to God that it never occurs,” Simpson said.

Darren Curry, another parent and a school council member, said he had seen both bad and good police officers, and you’ll never know the kind of officers you’ll run into.

“But when I need one, I’d rather roll the dice and have one,” he said.

The Westinghouse school council voted on July 13 to keep one police officer on campus. Chicago Public Schools (CPS) empowered the school councils to make the decision about on-campus officers last year. These councils are made up of parents, community residents, school staff, and principals, and they serve as the policymaking body of the schools.

All 55 public high schools that currently have on-campus officers need to decide by July 14 if they’re going to keep those officers for the new school year.

In August, the Chicago Board of Education (CBE) will consider a new annual contract with the Chicago Police Department (CPD) based on the number of participating schools.

CBE’s contract with CPD last year fell to $12 million from $33 million after 17 schools opted out of the School Resource Officer Program. This year, eight more schools—mostly on the North and Southwest Side—opted to remove all on-campus officers, , according to the CPS data. 24 schools opted to remove one officer from campus.

The movement to remove police officers from public school campuses gained momentum in Chicago following the death of George Floyd in May 2020.

In August 2020, a coalition of 12 local organizations demanded CBE terminate its contract with CPD and remove all on-campus officers before the fall semester. The coalition includes the Chicago Teachers Union, the Chicago Lawyers’ Committee for Civil Rights, and Chicago United for Equity.

One of the coalition’s public letters reads: “Unfortunately, CPD police officers have been used to fill the gaps in Chicago’s most under-resourced schools, particularly in the South and West sides. … These students remain over-represented, targeted, and disproportionately subjected to over-policing resulting in the school-to-prison pipeline.”

Dwayne Truss, a CBE member who voted to renew the CPD contract last year, told the SunTimes after the vote, “What concerns me the most is, if you don’t agree with me, somehow you don’t like kids. You’re not concerned about kids’ safety.”

Truss, a black parent who raised five sons in the violent Austin neighborhood on the West Side, said to the contrary, he does care about kids’ safety.