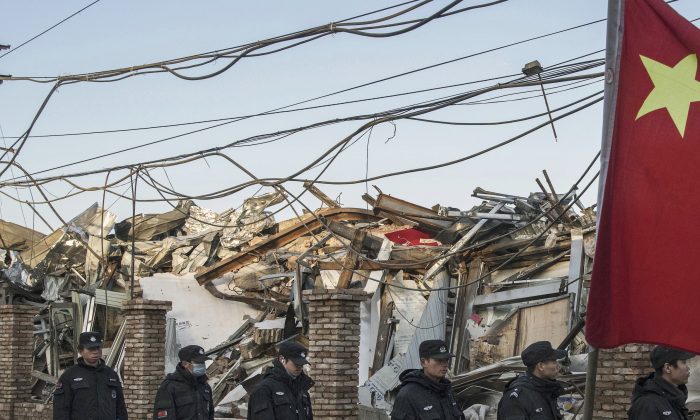 Chinese police walk in a line passed buildings demolished by authorities in an area that used to have migrant housing and factories in the Daxing District of Beijing, China on Dec. 6, 2017. (Kevin Frayer/Getty Images)
China

The key to the successful second round of public-private restructuring

As of now, the Chinese Communist Party (CCP) regime has introduced three mixed-ownership reforms (mixed reforms) across 50 experimental state-owned enterprises — termed the second round of public-private partnerships. The 19 experimental companies involved in the first two reforms were directly led by the central government, but the third time was different, as it mainly directed at locally run state-owned enterprises (SOEs). In this reform, private businesses actively sought to merge with the state, and the SOEs received them with open arms.

For both the state and private sectors, the motivation in the new round of public-private partnerships has less to do with its official description of “improving the governance structure and management level of enterprises” and everything to do with the pressures of growing debt.

The reason why the CCP regime implements mixed reform of SOEs is because its hand has been forced by debt.

The CCP is implementing mixed reform of the SOEs because its hand has been forced by massive, long-term debt. In 2009, the authorities introduced a stimulus consisting of four trillion yuan ($580 billion) from the central government and more than 20 trillion yuan ($2.91 trillion) from local financial platforms, mainly into infrastructure and real estate. However, the results of this stimulus fell short of expectations.

The authorities’ solution is to continue printing money and increase its investments in enterprises. Without a constant increase in money supply, companies will be unable to repay their outstanding loans and go bankrupt, in turn worsening unemployment.

The CCP uses the stock market and real estate as a money reservoir, from which it directs astronomical sums to be placed in real estate. This process is aided by the public’s fear of inflation.

Data shows that the value of Chinese housing loans at the end of 2007 was 5.07 trillion yuan ($740 billion) — a decade later, it rose nearly tenfold to 50.5 trillion yuan ($7.36 trillion) by the end of 2017. Driven by the government’s efforts, part of the debt burden was transferred from corporations and government departments to the populace.

The international community has observed, and Chinese domestic experts have been compelled to admit that from the perspective of various indicators, China’s financial systemic risks have exceeded U.S. levels that existed prior to the subprime mortgage crisis.

Guo Shuqing, chairman of the China Banking Regulatory Commission, said at the Lujiazui Financial Work Conference in mid-June that the systemic risks of China’s finance, including the size of bad debts owned by banks (the most risky being real estate loans and state-owned enterprise loans), huge local debts (China’s state-owned media recently said there may be an outbreak of defaults in the 22 trillion yuan of local debts this year), and closure of various financial platforms in the shadow banking system. The solution put forward by the authorities can be summarized in the following words: defusing financial bombs, directional demolition, and stress testing. Beijing sees mixed-ownership of SOEs as an important method to reduce the debt ratio of enterprises and bad debts in banks.

Since the mid-1990s, there have been three ways for SOEs to reduce their debt ratios: deal with bad assets; lay off employees; and third, by expanding equity financing by transferring debt to equity to attract various types of capital and develop mixed-ownership reform, equity diversification reform, and increasing corporate capital via marketization.

At present, there is no way to deal with bad assets and laying off employees would cause unemployment and endanger the regime’s efforts to maintain stability. The third method thus is the best solution available.

In 2015, the CCP regime issued the “State-owned Enterprise Reform Plan,” hoping to reduce the corporate debt ratio and reinforce SOEs by having private enterprises merge with them. Take China Unicom, one of the companies that participated in the first round of experimental reforms, as an example: in August 2017, China Unicom completed the mixed reform and received a total of 78 billion yuan ($11.36 billion) from 14 investors, including the four internet giants, Tencent, Baidu, JD.com, and Alibaba, which are all private enterprises. There were also SOE investors, such as China Life Insurance Company Limited, CRRC Corporation Limited, and China State-owned Enterprise Structural Adjustment Fund Co., Ltd.

In this example, state-owned capital remained in the dominant position, with no power given to the private firms. Operations did not improve, but the the debt ratio nonetheless dropped significantly: the debt to asset ratio decreased from 62.6 percent in June 2017 to 46.5 percent by the same time in 2018.

After China Eastern Airlines, another company subject to the first mixed reform, completed the plans, its debt to asset ratio dropped to around 70 percent from 74.08 percent in 2016. Other companies experienced similar results.

Other Reasons for Mixed Reform

Fearing a lack of local support for the third round of mixed reforms that began in July, the CCP General Office and State Council issued a joint guideline in mid-September called “Guiding Opinions on Strengthening the Asset and Liability Constraints of State-owned Enterprises,” setting a hard quota for SOEs: by the end of 2020, their average asset-liability ratio must be lowered by about 2 percent compared with the end of 2017.

Why do private enterprises take the initiative to join SOEs? As the pressure on banks’ deleveraging increases, listed companies have difficulties with capital. Many private enterprises take the initiative to buy shares from SOEs that are suffering from debt burdens, declining stock value, decreases in prices of pledged shares, or poor business performance.

According to the statistics of Iwencai of Hithink RoyalFlush Information Network, as of Aug. 10 this year, 331 listed companies in the A-shares had traded stocks, including 35.34 percent of companies or institutions with state-owned assets.

It is worth noting that in the equity transfer to state capital, more than 58 percent of the private companies didn’t charge any money or transferred them as administrative transfers. Beijing Kingee Culture announced that a major shareholder transferred an equity with one yuan ($0.15) and the actual controller of the company was changed to the State-owned Assets Supervision and Administration Commission located in Beijing’s Haidian District.

The reason why these companies were willing to transfer their shares at a price of one yuan per share is because under the current atmosphere of de-leveraging, they couldn’t find any banks to renew their loans and faced a liquidity crisis. For example, Kingee Culture had a large amount of financing due in the first half of the year, with three billion yuan ($0.44 billion) of liquid assets being taken away. Whether the company was a going concern became a question. Montnets Rongxin Technology took the initiative to join the mixed-reform due to poor operations. The company’s chairman, Yu Wensheng, and the third largest shareholder, Sun Hui, pledged in high proportion. As the stock price continued to decline, if the company is not able to reverse the decline in its performance, it will face great pressure from margin calls.

Describing the mixed reform of local SOEs, mainland Chinese experts have claimed that under the pressure caused by severe economic downturn, the private enterprises are taking “self-rescuing” measures (that is, joining SOEs) as a result of natural market forces. These comments neglect two government policies that are being used to force private enterprises to actively join state firms. First, it used de-leveraging to tighten loans for private enterprises, which increased their difficulties to begin with. Then it issued fiscal and tax policies favorable to the SOEs, which lets them profit without investing anything.

When private enterprises still had other means, they refused to join the SOEs. One year before the CCP issued the “State-owned Enterprise Reform Plan” in 2015, it had collected opinions for the plan. Almost all private entrepreneurs did not agree to participate in state-owned firms, including prominent figures such as Wang Jianlin, Guo Guangchang, Xiao Jianhua, and Zong Qinghou, who publicly expressed their disfavor.

In the first half of 2017, all these people except Zong Qinghou were put under great pressure because of a large amount of overseas investment involving capital outflows that endangered financial stability. Guo and Xiao even lost their freedom and were forced to sell their overseas assets to pay their debts. After cleaning up this group of people, especially Deng Xiaoping’s son-in-law Wu Xiaohui, the first and second rounds of state-owned enterprises mixed reforms starting in the second half of 2017 were carried out successfully. The central state enterprises raised 61.88 billion yuan ($9.01 billion) in the stock market in the first seven months of 2018.

One of the major achievements of China’s economic reform was the establishment of a number of private enterprises. After this round of mixed reform, however, private enterprises are inevitably being squeezed out of existence. As I explored in my book “China: Breaking Down But Not Collapsing,” China has long been shackled by the structural limits of its political system, which manifests in economics as the stubborn insistence on state ownership as the main body. This round of SOE mixed reform was formulated as early as Hu and Wen’s second term. Xi Jinping was eager to try it during his first term, and now he has taken it as an important measure for financial bomb disposal, and easily achieved the goal of “advancing the state at the expense of the private sector.”

What is happening today is unlike the public-private partnerships of the 1950s, when during the “socialist transformation of industry and commerce,” the CCP regime created a planned economy by applying political violence. Instead, the new round of mixed reforms is being pushed through by the rigid force of financial deleveraging policies, pushing private enterprises into crisis, and indirectly pressuring them to join the SOEs of their own accord. Inbringing private enterprises into difficulties, to make them “actively” joined SOEs. It was a form of extortion.

Since the focus of this round of mixed reform is not “reform” but “mixing,” the operating mechanism of SOEs has not changed. The ailments of  wastage and economic inefficiency are still present, so in a few years, the state sector is bound to run into trouble again.