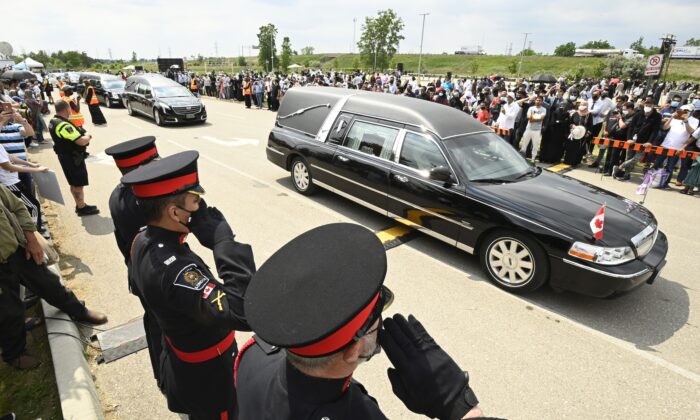 Police officers salute as hearses pass during the funeral for four Muslim family members killed in a deadly vehicle attack, in London, Ont., on June 12, 2021. Nathaniel Veltman, the driver of the vehicle, is facing terrorism charges. (The Canadian Press/Frank Gunn)
By James Risdon

Lone wolf killers are likely going to strike and murder innocents more often as a result of the “defund the police” movement, says a former strategic analyst in the Canadian intelligence community.

“Security systems in Canada are being torn in all directions simultaneously and they’re understaffed to do what they are being asked to do,” Phil Gurski, the president and CEO of Borealis Threat and Risk Consulting, said in an interview.

“If you don’t have enough resources, then potentially there will be more of these attacks.”

The most recent lone wolf attack in Canada occurred on June 6 in London, Ont., when Nathaniel Veltman jumped the curb with his vehicle and struck a family of five, killing four of them and injuring one. Veltman, 20, is now facing terrorism charges.

Lone wolf, or lone-actor, attacks—in which an individual without formal ties to a terrorist organization goes on a murderous rampage—are considered among the most difficult to prevent, and the most shocking.

According to the Canadian Network for Research on Terrorism, Security, and Society, since the 9/11 attacks in New York there have been several high-profile lone-actor terrorist attacks in Canada, the United States, France, New Zealand, Norway, the United Kingdom, and other countries.

Terrorism experts Mark S. Hamm and Ramón Spaaij, authors of “The Age of Lone Wolf Terrorism,” have documented 216 attacks by 83 lone wolves in the United States alone between 1940 and 2013.

And with the emergence of Black Lives Matter protests and the defund the police movement, some experts worry police departments may soon be stretched too thin to effectively stop the growing number of lone wolves.

South of the border, many police officers are quitting their jobs.

In Seattle, more than 200 police officers have left their jobs since the BLM protests started last summer. In Louisville, Kentucky, nearly 190 cops have quit the police force either through retirement or resignation. New York’s police department is down by roughly 15 percent. Portland lost 115 officers in the last year.

In Canada, too, the number of police officers per capita is dropping, according to a Statistics Canada report released last December. The average Canadian police officer is getting older and is being asked to handle more calls.

Add to that the defund the police movement and the shaming of police officers on social media, and the result is a massive drop in the morale of those remaining police officers throughout North America.

“Police officers I’ve heard of anecdotally are reluctant to answer calls because they’re afraid of what might happen,” Gurski said.

“Everyone’s got a cellphone and starts recording them as soon as they come. One little statement and … it’s on social media.”

With the drop in the number of police officers and the understaffing of intelligence services, some researchers have looked into the possibility of using artificial intelligence tools with predictive analytics to identify potential lone wolf killers.

In a paper published by the U.S. Department of Justice in 2015, Hamm and Spaaij identified key traits common to many of these killers.

“The evidence indicates that most of them are unemployed, single white males with a criminal record. Compared to members of terrorist groups, lone wolves are older, less educated, and more prone to mental illness. When compared to members of al-Qaeda, American lone wolf terrorists are more likely to be unmoored from society,” they wrote.

“In their social exclusion, lone individuals feel deprived of what they perceive as values to which they are entitled, and form grievances against the government responsible for their unemployment, discrimination, and injustices.”

The two also noted that lone wolf killers often tell others, either in person or on social media, what they intend to do.

In Europe, researchers have looked into the possibility of preventing lone wolf attacks by scouring the web and identifying potential killers.

“Since lone wolves are acting on their own, information about them cannot be collected using traditional police methods such as infiltration or wiretapping,” they wrote.

“One way to attempt to discover them before it is too late is to search for various ‘weak signals’ on the internet, such as digital traces left in extremist web forums. With the right tools and techniques, such traces can be collected and analyzed.”

The researchers suggested a number of different technologies that could be used to harvest and analyze information from the web to ferret out possible lone wolf terrorists.

Artificial intelligence systems that try to identify potential lone wolf killers before they act produce both too many false positives and false negatives. They identify too many people thought to be possible killers who never act out, and they also fail to spot real threats because these don’t fit the profile of those thought to pose a risk, Gurski explains.

Even with the best, most advanced technology, it’s still not possible for police forces to predict criminal activity like in the 2002 movie “Minority Report.”

Hamm told The Epoch Times what while the FBI has people scouring the web to spot suspicious activity, it’s not done with an artificial intelligence system and it’s only a starting point for investigations.

“That has been going on for some time with the FBI and the New York City Police Department,” he said.

“Data mining of social media accounts is actually a form of phishing and they pay confidential informants a great deal of money to go online … and share that information with the FBI. Depending on the information, that can lead to the opening of an investigation.”

The greatest asset to law enforcement in ferreting out and stopping potential lone wolf killers, however, is often neither the web nor confidential informants—it’s friends and family of the lone wolf killers themselves.

Perhaps the most extreme example of that is James G. Cummings, an aspiring neo-Nazi in Maine who, upset by the election of Barack Obama, was trying to build a “dirty bomb” that would spread radioactive material over a wide area.

Cummings allegedly told his wife what he was planning to do as he mixed ingredients for the bomb in their kitchen sink. She reacted by picking up a gun and shooting him dead.

The plan hatched by Ted Kaczynski, a.k.a the Unabomber, was also foiled by a relative.

“The Unabomber was the subject of the largest FBI manhunt in history, but the FBI did not stop him. He was arrested because his brother noticed his writing style in a letter was very similar to the [Unabomber Manifesto],” says Hamm.

“The average citizen can do more to stop these incidents than law enforcement.”

“Nearly half of those lone wolves had diagnosed mental illnesses, from profound depression to autism to Asperger syndrome … and most of them also had a record of criminal activity,” he says.

“I’ve gone through case after case of people who had diagnosed mental health issues but were still about to pass a background check to buy guns and enough ammunition to start a small war,” he says. “If anyone checks any of these red flags, you shouldn’t sell them a gun.”