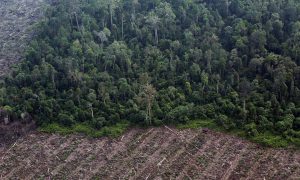 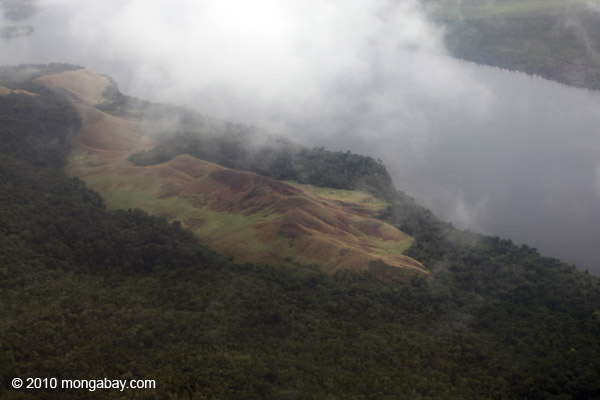 Deforestation May Be Ramping Up in Papua, West Papua

Despite being covered in commodity concessions and viewed by some as becoming a focal point for the Indonesian government’s palm oil development in the country’s eastern half, the provinces of Papua and West Papua have, rather mysteriously, recorded very low deforestation rates compared to the rest of the archipelago. This may seem odd to some observers, especially given the number of reports and photos that have poured out of the two provinces highlighting the exploitation of their jungles.

But rather than represent a pleasant surprise for environmentalists and the peoples inhabiting these restive lands, the reality of the situation is a bit more complex. While it may be understood that large-scale deforestation in Papua and West Papua is still in its early stages, finding accurate deforestation data for these two provinces is no easy task. As a result, conflicting numbers published by the government and NGOs tell vastly different stories about what’s really happening on the ground.

Let’s start out with official government data. The Indonesian Ministry of Forestry, an agency viewed by some as corrupt and mismanaged, claims in its 2013 Forest Area Statistics report that West Papua lost 20,285 hectares of forest from 2011-2012, while it provided no deforestation data for Papua province. Attempts by mongabay.com to clarify this absence of data with the ministry were unsuccessful.

In comparison to the forest loss of Indonesia as a whole, which reached 840,000 hectares in 2012 alone, the forests of Papua and West Papua have remained relatively unscathed. But although deforestation has not been as rampant in these regions as it has been for other Indonesian provinces, Charles Tawaru, Greenpeace’s forest campaigner in Papua, says that one thing is for certain: “The forests of Papua and West Papua continue to be degraded.”

Global Forest Watch data show an upward trend of deforestation in Papua, with tree cover loss nearly doubling between 2011 and 2012, and GFW maps indicate that much of Papua’s tree cover loss occurred in the large number of timber and, to a lesser extent, palm oil and wood fiber concessions that dot its land. As timber concessions become depleted across other parts of the archipelago, namely Sumatra and Kalimantan, intact forests in Eastern Indonesia risk further depletion.

Logging has traditionally driven most of the provinces’ deforestation, but West Papua, according to Greenpeace, is currently undergoing something of a palm oil boom in certain regencies. Indonesia remains the world’s largest producer of palm oil and, as stated in a recent working paper published by the Center for International Forestry Research (CIFOR), the country is targeting to produce 40 million tons a year by 2020 — twice the output it recorded in 2010.

“In the provinces of Papua and West Papua, the area of oil palm plantations is low compared to other regions,” states the CIFOR paper. “However, it is growing at a steady rate.”

But not all concessions in Papua and West Papua are being developed at the same pace. Global Forest Watch shows some concessions in the provinces contain intact forest landscapes (IFLs) that have been degraded, while others are completely void of IFLs. On the other hand, many of the concessions on the map appear to have large swaths of IFL.

Still, given how much area concessions cover in the provinces, deforestation figures remain unusually low. After all, according to government figures cited by Greenpeace, Papua contains about a third of the remaining rainforests in Indonesia, a country that not too long ago gained international notoriety for surpassing Brazil as the world’s largest deforester in terms of annual rate.

Yuyun claims that the presence of concessions doesn’t necessarily translate to active deforestation, especially when it comes to timber plots. “There are a lot of logging concessions that still have active licenses but have no activity on the ground,” he said. “Those that still have tracts of IFL could be new or inactive old concessions.”

Meanwhile, palm oil concessions represent both a present and future issue for Papua’s forests. Sorong and Manokwari regencies are currently palm oil hotspots in West Papua, a province that has seen its area of palm oil estates increase from 31,000 hectares in 2007 to 70,000 in 2011, according to CIFOR.

In Papua province, the Merauke Integrated Food and Energy Estate (MIFEE) has attracted a lot of attention from activists and local communities alike for its wide-ranging concession grants. According to a 2012 Greenomics report, MIFEE is slated to cover over one million hectares of agricultural land in the Papuan region of Merauke.

Although only two of 10 proposed blocks were to include palm oil, Greenpeace has previously noted that “significantly” more palm oil concessions were to be included. According to Yunyun, roughly 600,000 hectares included in the project’s limits have thus far been opened up for production.

Because of how sensitive they are politically and how valuable they are economically, the provinces of Papua and West Papua represent major development priorities for the Indonesian government and are therefore prone to the effects of extractive industries. Although the situation may be hard to definitively gauge given spotty information, deforestation in Indonesian New Guinea may be more widespread than any published data purport.