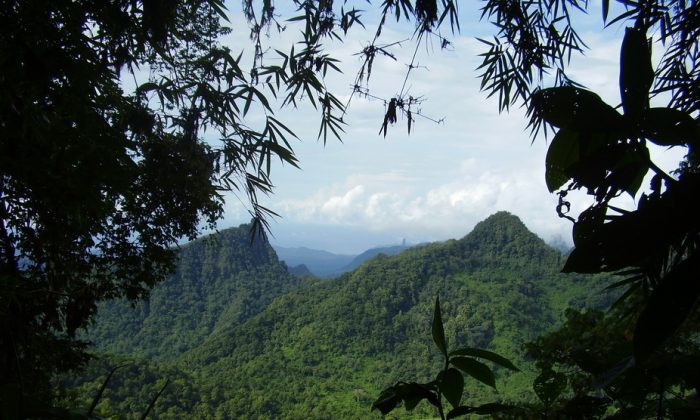 The forests of Sao Tome and Principe are being lost at an alarming rate. (Ricardo Lima)
Africa

Deforestation: An Alert From the Islands of São Tomé and Príncipe

When visiting the volcanic islands of São Tomé and Príncipe off the coast of West Africa, one is immediately struck by how unusual these tropical islands are. The steep, volcanic mountains seem to be swathed in impenetrable, story-book jungle. But, as ecologists know, first impressions can be deceiving.

When São Tomé and Príncipe were discovered by Portuguese navigators in 1470 the land was entirely covered by forest. In more than five centuries of human occupation, most of this native forest has disappeared. Indeed, most of the green one sees from the air today comes from shade plantations and degraded forests.

The islands have been called the “African Galápagos,” in reference to the Pacific island archipelago famous for its high level of endemism. But, though they are nowhere near as famous as their South American counterpart, they win hands-down when it comes to unique biodiversity: São Tomé and Príncipe are home to more endemic species in an area that is eight times smaller than the Galápagos.

This is perhaps no surprise, as tropical forests are biodiversity hotspots that hold far more species than any other terrestrial biome. They also provide key ecosystem services like food, timber, and climate regulation.

But forests are being lost at an alarming rate. Between 1990 and 2015, 129 million hectares of forests were lost in the world—an area similar to that of South Africa. Sub-Saharan Africa itself registered some of the highest deforestation rates: up to 14 percent in the south and east, and 10 percent in central and west Africa.

5 Trends That Will Define the World’s Forests in 2016

The Situation in São Tomé and Príncipe

The last national forest survey for São Tomé and Príncipe was conducted in 1999. According to those estimates, 10 percent of the country comprised non-forest land-use, and 61 percent was covered by forests and 29 percent by shade plantations. The shade plantations constitute agro-forestry systems that produce coffee and cocoa, the country’s key export crops.

The numbers might suggest that there is little cause for concern, but they do not account for more recent trends of forest loss. They also don’t account for whether forests are native or not. In addition to the shade plantations, much of the islands are covered by “degraded” forested ecosystems like secondary forests. These are dominated by introduced and invasive species like the breadfruit, the African nutmeg, and the oil palm. Native forests are largely restricted to some remote valleys and inaccessible mountain areas.

The islands’ fast-growing economy and human population have had a significant effect on the native forests. The islands’ populations have increased by more than one-third since the turn of the century. As land has become scarce, people have turned to the forest to sustain their livelihoods. At the same time, the government has licensed large areas of forest to commercial interests. In the past seven years, it has handed 5 percent of the country to oil palm production and 5 percent to commercial cocoa producers.

Despite there being similar legal protection for their natural forests, the reality of conservation is very different on the islands.

Príncipe has a period of three months during which it is forbidden to cut trees. Most available timber is imported from certified producers and it is unlikely to find illegally felled trees. In contrast, illegal logging is rife on the larger and more populous São Tomé.

One explanation for the difference between the islands is that the United Nations Educations Scientific and Cultural Organization classified Príncipe as a biosphere reserve in July 2012. The regional government now promotes the island as an example of sustainable development in action.

Forest loss and degradation are leading to a scarcity of forest resources. In addition to loss of habitat through deforestation, native species are faced with degraded forest systems that offer poor habitats. This poses a measurable threat to biodiversity.

The well-being of future generations is also at stake.

The people of São Tomé and Príncipe rely heavily on forest resources. Nearly all houses are made out of wood. Giant land snails caught in the forest are an important source of protein, as are fish from inshore fisheries that are caught in dugout canoes. Both are usually cooked over charcoal or firewood obtained from the forest.

These resources have become difficult to access, and there is insufficient timber supply to meet the islands’ growing needs. The timber that is available is of a low quality, lasting for only about five years, and is unsuitable for construction.

Deforestation Should Be at Heart of Climate Discussion, Says NGO Panel
Zero Deforestation Commitments Bearing Fruit in the Amazon

Authorities are not indifferent to the situation. The timber shortage has become so bad that government is planning to import timber from Equatorial Guinea. The hope is that a cheaper supply will provide a temporary market solution for the current crisis, and allow Santomean timber stocks to recover.

But much of the timber sector operates outside the law. The Forestry Directorate is short of money, vehicles, and manpower. It cannot begin to address the complaints of illegal activities it receives. Moreover, when the authorities do try to act, they are frequently met with hostility on the ground, with people routinely blocking roads to hinder law enforcement.

The situation in São Tomé and Príncipe mirrors worrying global trends in forest degradation and loss. Finding solutions is imperative, and hopefully some of the experiences from this small island nation will provide useful lessons for other parts of the world.

Ricardo Faustino de Lima is a postdoctoral researcher at the Center for Ecology, Evolution, and Environmental Changes, Universidade de Lisboa, in Portugal. Martin Dallimer is a lecturer in environmental change at the University of Leeds in the U.K. This article was originally published on The Conversation.