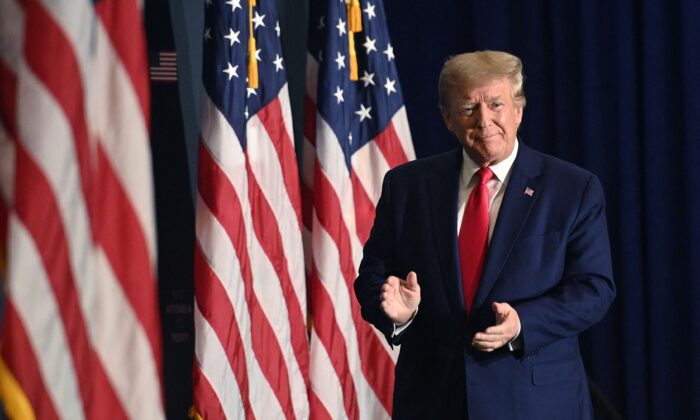 Defiant in His Return to Washington, Trump Hints at Another Run for White House

Speaking in Washington for the first time since his presidency and its turbulent end, Donald Trump didn’t say he was running for president in 2024. But he didn’t say he wasn’t. And sometimes, he sure sounded like it.

Trump spoke to an adoring crowd gathered for the America First Agenda Summit. The America First Policy Institute group formed after his presidency, providing a place to land for his supporters as well as current and former members of Congress.

But the crowd of 1,200 staid Republicans, conservatives, and Right to Lifers in suits and business dresses—not a MAGA hat in sight—erupted into cheers of “Trump, Trump, Trump,” “USA, USA, USA,” and “Four more years, four more years” as their hero delivered the keynote speech.

“They want to damage me so I can no longer go back to work for you,” Trump told them. “And I don’t think that’s going to happen.”

“It was fantastic,” Alfonso Aguilar, president of the Latino Partners for Conservative Principles, said afterward. “It’s a new chapter. He’s moved on from speeches he’s been giving at rallies to energize the base. He’s now focusing on the future. He’s starting to sound like a presidential candidate.”

Trump, for most of the 90-minute speech, focused on growing urban decay, crime and homelessness, and the problems of illegal immigration. He ripped the Biden administration for its policies so rapidly reversing a strong economy and a border that he’d brought under control and the Democratic Party for the chaos in big cities that party dominates.

He urged the death penalty for drug dealers, who he said each cause the deaths of 500 people. He advocated quickly building sturdy tent developments on cheaper land on cities’ outskirts and staffing them with doctors and social workers to get a burgeoning homeless population off the streets they litter, in cities like San Francisco, with used needles.

He urged the reinstitution of his administration’s border controls, including negotiating for Mexico to use its troops to enforce the “Remain in Mexico” policy for would-be immigrants and threatening Central American countries with loss of foreign aid if they didn’t take back deported criminals like MS-13 gang members.

It wasn’t until the end that Trump got around to the issues of an election he still says was stolen and of the televised hearings that have gone on for weeks investigating the events on Jan. 6, 2021.

That day, Trump supporters marched on the Capitol to get Congress to reject Electoral College votes they said were tainted. Some marchers rioted. One Trump supporter was shot and killed by police, another died in a stampede after being beaten by police and two more died of cardiac events.

Trump decried Jan. 6 defendants having been held without bail, some for more than a year, including people who hadn’t even been inside the Capitol. Earlier in the speech, he had decried Democratic policies releasing violent criminals without bail, including the suspect in last week’s stabbing attack on Lee Zeldin, a Republican Congressman running for New York governor. The suspect was later rearrested on federal charges and held.

And Trump decried his own persecution at the hands of Democrats—two impeachments, the Mueller investigation, and now this.

“If I renounced my beliefs, agreed to stay silent, agreed to stay home, the persecution of Donald Trump would cease immediately. But that’s not what I’ll do. I can’t do that because I love our country and love the people of our country.”

“I ran for president, and I won. … I ran a second time and did much better. We just may have to do it again,” he said to loud applause.

Trump warmed to the crowd, riffing and improvising more as he went along. He hammered Democratic adversaries like Nancy Pelosi, Chuck Schumer, and Adam Schiff. He doubled down on his administration’s policies. Police should be able to do their jobs with more impunity, bureaucrats should be easier to fire, and the border wall should be built, he said.

And he spoke to more recent issues: Men shouldn’t be able to compete in women’s sports.

“I’d be the greatest women’s basketball coach. I’d go to Lebron [James] and say, ‘Have you ever had a desire to become a woman?'”

“It’s so disrespectful to women. And so unfair.”

A small knot of 20 or 30 protesters set up across from Washington’s Marriott Marquis Hotel, where Trump spoke. They chanted and drummed. One guard said they’d been there for four hours. They brandished signs saying “Trump is a loser” and “Arrest the mofo already.”

Correction: a previous version of this article incorrectly described the circumstances of the deaths of the four Jan. 6 protesters. The Epoch Times regrets the error.