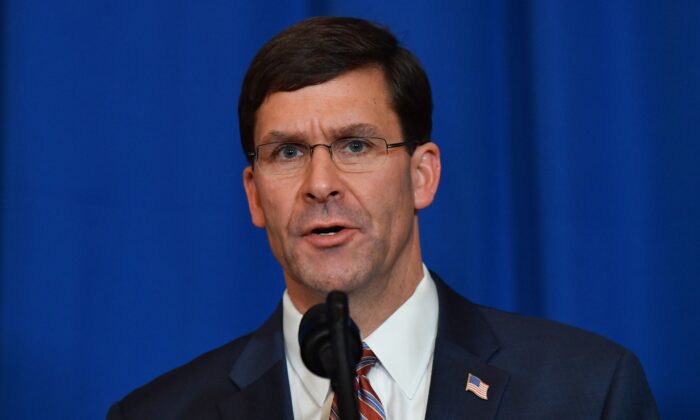 U.S. Secretary of Defense Mark Esper speaks onstage during a briefing on the past 72 hours events in Mar a Lago, Palm Beach, Florida, on Dec. 29, 2019. (NICHOLAS KAMM/AFP via Getty Images)
US News

Secretary of Defense Mark Esper has confirmed that “defensive strikes,” including on the headquarters of the Iran-backed Hezbollah Brigades terrorist group, also known as the Kata’ib Hezbollah, have been “successful.”

The Dec. 29 strikes on Kata’ib Hezbollah targets in Iraq and Syria were approved after the death of a U.S. defense civilian contractor who was killed in a rocket attack on a northern Iraqi military base.

Alongside Esper at a press briefing, Secretary of State Mike Pompeo said the loss of life was just the latest in many attacks that have been “going on now for weeks and weeks and weeks,” putting U.S. lives at risk.

Esper said that five targets associated with Kata’ib Hezbollah were attacked by the U.S. military, including three targets in Western Iraq and two in Eastern Syria. These targets were “either command and control facilities or weapons caches” for the Iranian-backed Shi’ite Muslim terror organization, Esper told reporters on Dec. 29.

The strikes were carried out two days after the killing of a U.S. civilian contractor in a 30-plus rocket attack by the terrorist group that also injured four U.S. service members and two members of the Iraqi Security Forces (ISF) near the oil-rich city of Kirkuk, officials said.

Hoffman said he hopes the strikes will degrade the group’s ability to carry out future attacks against OIR forces.

At least 25 Kata’ib Hezbollah fighters were killed and at least 55 wounded following the three U.S. air strikes in Iraq, and at least four local Kata’ib Hezbollah commanders were among the dead, according to Iraqi security and militia sources. The group’s headquarters near the western Qaim district on the border with Syria was hit and destroyed.

Pompeo told reporters after a briefing with President Donald Trump that the U.S. military may take “additional actions” in the region to defend U.S. interests.

“We will not stand for the Islamic Republic of Iran to take actions that put American men and women in jeopardy,” Pompeo said.

The attacks were launched by F-15 fighter jets, Esper said, adding that all pilots and aircraft have since returned to base safely.

Esper, meanwhile, termed the offensive “successful,” but said that Trump had been informed that a further military response could be warranted.

“We discussed with him other options that are available,” Esper said. “I would note also that we will take additional actions as necessary to ensure that we act in our own self-defense and we deter further bad behavior from militia groups or from Iran.”

Hoffman added that while the OIR coalition is in Iraq at the invitation of the Iraqi government to both assist the ISF and ensure the lasting defeat of ISIS, the United States “will not be deterred from exercising its right of self-defense.”

He added that “Iran and their K.H. proxy forces must cease their attacks on U.S. and coalition forces, and respect Iraq’s sovereignty, to prevent additional defensive actions by U.S. forces.

“The U.S. and its coalition partners fully respect Iraqi sovereignty, and support a strong and independent Iraq.”

No group has claimed responsibility for the attack that killed the U.S. defense civilian contractor on Dec. 27, which is at least the 11th such attack in the past two months that has targeted an outpost where U.S. troops stay, the Military Times noted.

U.S. officials, however, believe Iranian-backed forces are responsible for most of the attacks, with one telling the news outlet that Iran-backed groups have been using lethal, extended-range 122 mm rockets in their recent attacks.

Founded in 2003 following the U.S.-led invasion of Iraq, Kata’ib Hezbollah joined other Shiite groups in their fight against ISIS. However, the group has targeted U.S. and coalition forces for nearly 20 years, gaining notoriety for its use of devices such as mortars and roadside bombs, The Wall Street Journal reported.

It is part of a 140,000 member umbrella for dozens of militia groups, named Popular Mobilization Forces, or PMF, which was formed in 2014 and is the largest armed group in Iraq outside state control. Its deputy commander, Abu Mahdi al-Mohandis (also known as Jamal Jaafar Ibrahimi), was formerly also the leader of Kata’ib Hezbollah, and has a long history of terrorist and subversive activities. In 1983, he led terrorist attacks against the U.S. and French embassies in Kuwait, and his group has since been accused of extrajudicial killings in western Iraq.

Unlike the majority of militias in Iraq that receive funding from the Iraqi state, Kata’ib Hezbollah receives its funding from the Iranian regime’s Quds Force, according to the U.S. Treasury, strengthening the influence of Ayatollah Khomeini on the Iraqi–Syrian border.

These militias have won 47 parliamentary seats, giving them significant influence in the Iraqi government, the WSJ reported.

Widespread protests have gripped Iraq since Oct. 1, with thousands taking to the streets in Baghdad and in the predominantly Shi’ite south. The largely leaderless movement decries the Iranian regime’s growing influence in Iraqi state affairs.

The mass uprisings have left more than 450 people dead, the vast majority of them demonstrators—killed by security forces firing tear gas and live ammunition. The Jerusalem Post reported that Iranian-backed militia forces have been blamed for the deaths.

The Trump administration in early December imposed sanctions on three leaders of Iran-backed militias in Iraq for their alleged role in the killing of Iraqi protesters.

Esper has said that intelligence and forensic analyses of the rockets and launchers pointed to Iranian-backed militia groups.