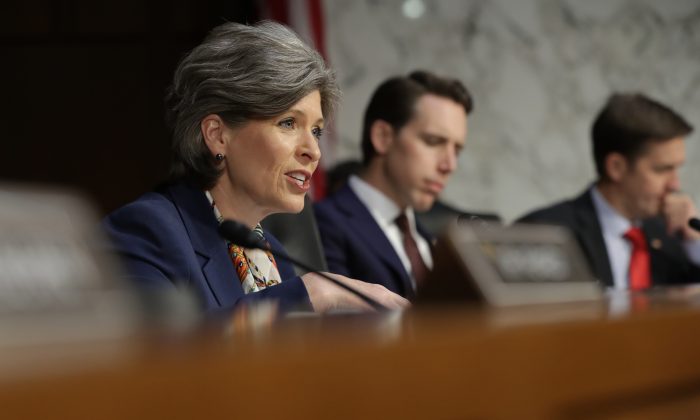 Sen. Joni Ernst (R-Iowa) at a hearing on Capitol Hill in Washington on Jan. 15, 2019. (Chip Somodevilla/Getty Images)
US News

China’s detailed strategy in the field of artificial intelligence (AI) technology and Russia’s efforts to catch up demand a response by the United States and a need for collaboration with the private sector to accomplish that, Department of Defense (DOD) officials told lawmakers at a Senate hearing on March 12.

Participants in the hearing noted that an executive order issued in February by President Donald Trump to maintain the United State’s AI leadership had signaled the need to push forward in developing this technology.

Sen. Joni Ernst (R-Iowa), chairwoman of the Subcommittee on Emerging Threats and Capabilities, observed that AI was expected to affect “every corner” of the DOD, and the United States needs to “move quickly to adopt these capabilities so that we don’t lose the technological edge.” Likewise, Sen. Jeanne Shaheen (D-N.H.) repeatedly emphasized the need for research and innovation, saying “there are policies that we need to put in place to encourage that.”

Michael Brown, director of the DOD’s Defense Innovation Unit (DIU), testified that “the Chinese government has outlined a comprehensive, whole-of-government strategy to become the global leader in AI” and that “Russia is similarly focused on building its AI capacity, but is behind the United States and China in terms of overall AI investment, research, and startups.”

Directed by Trump’s executive order, issued Feb. 11, and the DIU’s AI Strategy, the unit will seek solutions and new capabilities in AI by working with commercial sources and talent, Brown said.

“Cultural divides and ethical differences are often blamed for the lack of closer cooperation between DOD and Silicon Valley, but more often than not the true deterrent is misaligned economics,” he said.

“What I don’t want to see is some … of the best intellectual talent we have out there being funded with VC [venture capital] money from places like China … but if … we’re not giving them an opportunity, that’s what’s going to happen,” he said.

Efforts such as the executive order and the National Commission on AI established by Congress in August 2018 would contribute with “weighty recommendations …on how we’re looking at artificial intelligence,” Shanahan said.

The program was instituted to both incentivize research and produce quick results, he said.

Brown, Shanahan, and Highnam all stressed the importance of attracting private-sector talent and businesses to provide AI to the Defense Department, as the Cold War Manhattan Project model of defense research is no longer relevant in today’s research and technological environment.

“In the 1960s, a third of the global R&D was U.S. defense-related. Now, that number is 3.7 percent, so it just speaks to the need to look outside [government],” Brown said.

Sen. Gary Peters (D-Mich.) raised ethics concerns about the use of AI.

Shanahan responded by saying that “the algorithms we’ve fielded are light years away from SkyNet and fully autonomous weapons systems” (presumably referring to the fictional military AI system from the “Terminator” motion pictures). He described the rigorous ethical tests and evaluations that all DOD technologies are subject to while in development.

Peters noted that adversaries may not be similarly constrained as an additional factor for consideration in AI development.

Highnam added that ethical considerations are part of the technical discussions at DARPA, describing a recent colloquium led by former Secretary of the Navy Richard Danzig, as well as other research programs focused on issues such as “implicit bias” in data sets.