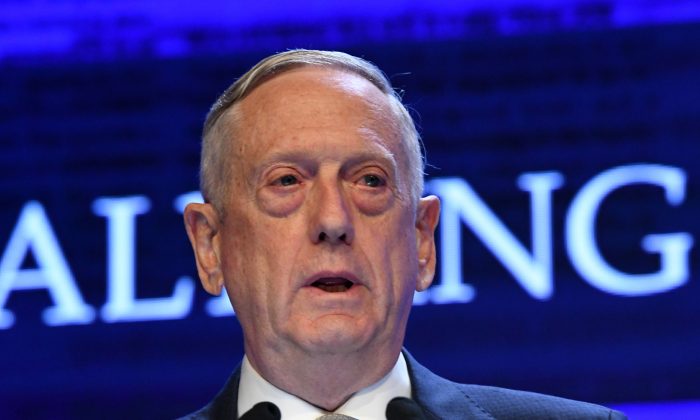 In a high profile speech in Asia, U.S. Defense Secretary James Mattis blasted China for committing “intimidation and coercion” in the South China Sea and said the United States will make sure Beijing’s aggression is met with “consequences.”

On Saturday Mattis spoke at the Shangri-La Dialogue, an annual security summit in Singapore that each year attracts speakers who are the top policymakers in the defense and security community of countries across the western Pacific.

“China’s militarization of artificial features in the South China Sea includes the deployment of anti-ship missiles, surface-to-air missiles, electronic jammers, and more recently, the landing of bomber aircraft at Woody Island,” Mattis said, referring to recent reports that have been extensively backed by satellite images available to the public.

“The placement of these weapons systems is tied directly to military use for the purposes of intimidation and coercion,” said Mattis. “China’s militarization of the Spratly [Islands] is also in direct contradiction to President Xi’s 2015 public assurances in the White House Rose Garden that they would not do this.”

Mattis vowed that the United States will push back against Beijing’s aggression, amid growing concerns that the established U.S. presence and security assurances across the western Pacific region are being eroded by the Chinese regime’s encroachments.

“When it comes down to introducing what they have done in the South China Sea, there are consequences,” said Mattis. “There are consequences that will continue to come home to roost with China, if they do not find the way to work more collaboratively with all of the nations who have interest.”

In response to a question from People’s Liberation Army Senior Col.  Zhao Xiaozhuo criticizing U.S. freedom of navigation exercises, Mattis said these U.S. actions were “a reaffirmation of the rules-based order.”

Mattis said that the United States will continue to provide arms sales to Taiwan, the democratic island nation that is being threatened by Beijing’s rapid military buildup and increasingly aggressive posture.

Mattis also criticized China’s “Belt and Road” initiative without explicitly naming the program, saying that Beijing has to rethink twice if they believe “piling mountainous debts on their neighbors and somehow removing the freedom of political action is the way to engage with them.”

In response to Mattis’s speech, Chinese People’s Liberation Army (PLA) Lt. Gen. He Lei was quoted by AFP as saying that “Any irresponsible comments from other countries cannot be accepted.”

Just last week, the United States renamed its Pacific Command the “Indo-Pacific Command,” a term that reflects the subtle shifting and upgrading of U.S. defense strategy in the region.

Under President Donald Trump’s new National Security Strategy unveiled last year, U.S. policymakers are now frequently pledging to defend a “free and open Indo-Pacific,” a term that is more inclusive than the more widely used “Asia Pacific” as it encompasses the Indian Ocean and India, a key U.S. ally that is also being threatened by Beijing’s aggression.

The Pentagon has added the “most capable ships” to the commander of Indo-Pacific Command’s fleet during the last year or two, according to Mattis.