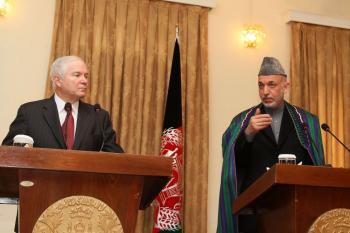 Afghan President Hamid Karzai (R) gestures during a press conference with U.S. Secretary of Defense Robert Gates at the Presidential Palace Dec. 8, in Kabul, Afghanistan. Secretary Gates is embarking on a weeklong trip to Afghanistan one week after U.S. P (Justin Sullivan/Getty Images)
US

Nicholas Zifcak
View profile
Follow
biggersmaller
Print
Defense Secretary Robert Gates arrived in Afghanistan on Tuesday to meet with Afghan President Hamid Karzai. Their meeting focused on how the U.S. and the 43 allied countries will implement President Obama's new strategy on Afghanistan while working with the Afghan national security forces. Establishing a long-term relationship between Afghan and U.S. forces was also among the topics, according to the American Forces Press Service.

Gates is the first senior U.S. official to meet with Karzai since Obama announced the new strategy in Afghanistan.

The stability of the Afghan government will be an important element in the scheduled July 2011 troop withdrawal from Afghanistan. Afterwards, the country and its security forces will be responsible for fending off the Taliban and al-Qaeda.

Following the Afghan elections in August, the legitimacy of Afghanistan's leadership was under question. According to the American Forces Press Services, Gates expressed confidence in the Afghan government, saying, "There is a tendency to paint this government with too broad a brush."

Along with the meeting between Karzai and Gates, concerns surrounding the strategy were discussed in a separate meeting on Capitol Hill on Tuesday. The House held a hearing on the strategy in Afghanistan with U.S. Ambassador to Afghanistan Karl Eikenberry and General Stanley McChrystal.

Eikenberry said the U.S. is working on several measures to help the Afghanis tackle corruption within their government, including creating certification programs for Afghan ministries and establishing an "Afghan FBI" to dig out corruption.

Establishing a system for the Afghanis to tackle corruption "is something we have to make progress on over the next 24 months," said Eikenberry.

Afghanistan was primarily ruled by a tribal system until recently. According to Eikenberry, progress has been made in building the Afghan government over the last seven years.

He said that stopping corruption in the region is "our most difficult task" and that the challenge of government accountability is "daunting," yet essential for success.

A key concern about the troop surge is whether more troops will be requested at the end of Obama's two-year time frame for the war, with and endpoint in July 2011.

McChrystal said he does not believe additional U.S. forces will be needed after the two-year deadline is met, adding that he will give his "best military advice," according to the situation.

He added that the July deadline is not an "impeding factor," but is instead "a bit of a forcing function" to work quickly.

The current strategy is to use resources within the troop surge to train the Afghan Security Forces—who will be entrusted to fend off the Taliban and corruption following troop withdrawal. "I believe that the key point here is the long-term strategic partnership with Afghanistan," said McChrystal.