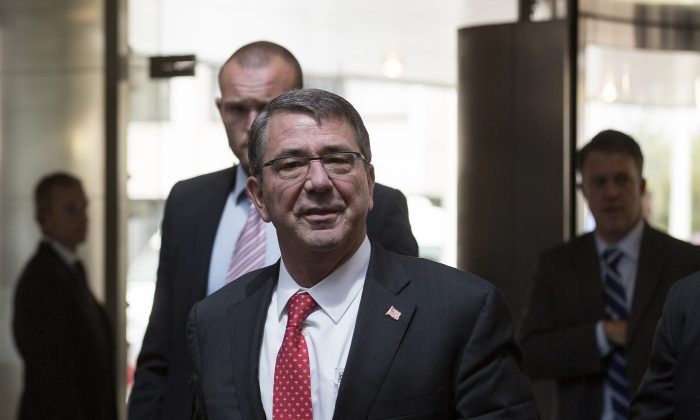 Afterward he told U.S. and coalition troops that the Kurdish armed forces, known as the peshmerga, are “the model of what we are trying to achieve” with a strategy of enabling capable and motivated local forces in northern and western Iraq to take the ground combat lead.

He said U.S. ground and air forces could defeat ISIS on their own, but the success would not last.

“We’re trying to get a defeat that sticks,” he told a group of several dozen troops. “And that can be delivered only by the people that live here,” adding, “that’s the secret sauce.”

Carter arrived on a military flight from Amman, Jordan, where he spent the night after holding meetings and giving a pep talk to U.S. troops in Baghdad on Thursday.

In Irbil, Carter is meeting with Masoud Barzani, president of the Kurdish regional government, and other Kurdish government and military officials. The U.S. Is helping train and equip Kurdish armed forces in battles against Islamic State fighters.

The Kurdish forces, generally more experienced and more effective on the battlefield than their counterparts in the Iraqi army, have played a vital role in containing the ISIS in northeastern Iraq.

They hold mostly defensive positions across large parts of northern Iraq and would be expected to play a key role in an eventual Iraq campaign to retake Mosul, which fell to IS in June 2014.

The U.S. military works closely with the Kurds, providing arms, training and advice. The Obama administration has resisted calls by some in Congress to bypass the Iraqi government in Baghdad and provide weapons directly to the Kurds.

The administration instead has sent arms through the central government, reasoning that this preserves the hope of avoiding a final division of the country into sectarian and ethnic enclaves.

The ISIS takeover of much of northern Iraq last year, including the city of Mosul, triggered a Kurdish push south and west to take control of the disputed city of Kirkuk, which is key to Iraq’s northern oil fields.

After his Irbil visit Carter was returning to Washington, concluding a weeklong Mideast tour that started Sunday in Israel and included visits to Jiddah, Saudi Arabia, and Amman, Jordan.

It was Carter’s first visit to Iraq since he took office in February.