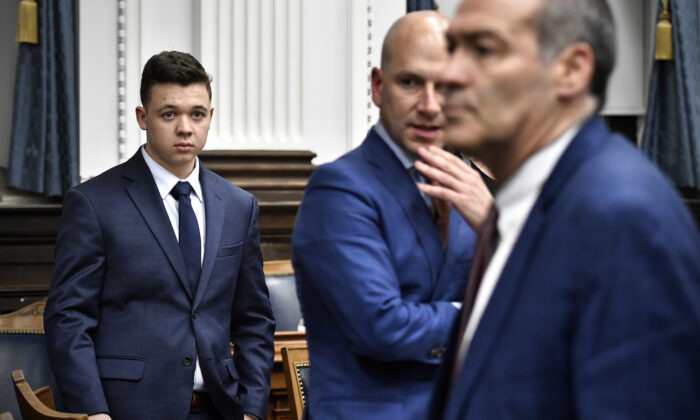 Kyle Rittenhouse, left, looks over to his attorneys Corey Chirafisi, center, and Mark Richards after getting off the witness stand during his trial at the Kenosha County Courthouse in Kenosha, Wisconsin, on Nov. 10, 2021. (Sean Krajacic-Pool/Getty Images)
US News

The judge presiding over Kyle Rittenhouse’s homicide trial in Kenosha, Wisconsin, said he will consider a mistrial motion after defense attorneys alleged that prosecutors violated the rights of the 18-year-old defendant.

Kenosha County Judge Bruce Schroeder did not immediately rule on the request from defense attorneys for a mistrial with prejudice.

Rittenhouse’s defense attorneys have accused prosecutor Thomas Binger of having violated the teenage defendant’s rights by mentioning his silence after his arrest for the Aug. 25, 2020, shootings.

After having ordered the jury out of the room, the judge scolded Binger for having spoken about Rittenhouse’s silence, calling it a “grave constitutional violation.” He added, “You’re right on the borderline and you may be over, and it better stop. This is not permitted.”

Separately, Binger referred to a video that Schroeder had deemed inadmissible and excluded from evidence at a pretrial hearing.

That video showed an incident two weeks prior to the shootings where shoplifters were seen running out of a CVS pharmacy with potentially stolen items. In the video, a voice that sounds like Rittenhouse was heard saying, “I wish I had my [expletive] AR. I’d start shooting rounds at them.”

The defense made a motion for mistrial after Schroeder admonished Binger for having tried to ask Rittenhouse questions in the cross-examination about the inadmissible video.

“You knew very well that attorneys can’t go into these types of areas when the judge has already ruled without asking outside the presence of the jury to do so. So don’t give me that,” Schroeder said, with the jury out of the room a second time.

When Binger tried to push pack, the judge responded, “Don’t get brazen with me.”

“When you say you were acting in good faith, I don’t believe you,” he also told Binger.

Rittenhouse lawyer Corey Chirafisi all but suggested prosecutors were deliberately trying to cause a mistrial because this one is “going badly” for the prosecution and it wants a do-over.

Rittenhouse took the stand for the first time on Wednesday, saying he used deadly force to defend himself. At one point, he broke into tears while recounting his encounter with Joseph Rosenbaum. Rittenhouse said that he “didn’t want to have to shoot” Rosenbaum, but Rosenbaum was chasing him and had threatened to kill him earlier.

“I didn’t notice Mr. Rosenbaum until he came out from behind the car and ambushed me,” Rittenhouse said, before he started to lose his composure and began sobbing, prompting the judge to call for a break.

Asked by his lawyer why he didn’t keep running away from Rosenbaum, Rittenhouse said: “There was no space for me to continue to run.”

Rittenhouse has pleaded not guilty for seven charges related to the Aug. 25, 2020, shootings, including homicide in the deaths of 36-year-old Rosenbaum and 26-year-old Anthony Huber, and attempted homicide for having injured 27-year-old Gaige Grosskreutz.