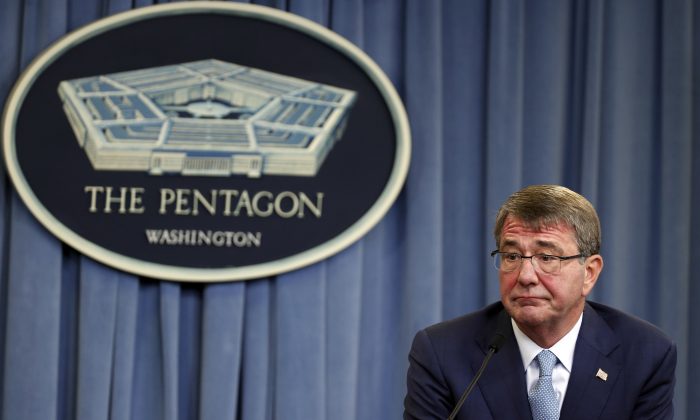 Secretary of Defense Ash Carter during a media availability at the Pentagon in Washington. (AP Photo/Alex Brandon)
US

Defense, Foreign Ministers to Plan Next Steps Against ISIS

WASHINGTON—Defense and foreign ministers from more than 30 nations are gathering in Washington to plan the next steps in the fight against the ISIS terrorist group and to determine what more they can do as the fights for key cities in Iraq and Syria move forward.

Defense Secretary Ash Carter will meet with his counterparts on Wednesday to discuss how they can accelerate the campaign and build on some of the momentum, particularly in Iraq. The meeting comes as Iraqi security forces, aided by the coalition, are preparing to encircle and eventually attempt to retake the key northern city of Mosul.

The meeting of defense ministers at Joint Base Andrews just outside Washington, D.C., will be the fourth time that Carter has convened an anti-ISIS coalition meeting. Pentagon press secretary Peter Cook said Carter will talk about the military campaign, and how it can be accelerated.

On Thursday, for the first time, Secretary of State John Kerry will host a joint meeting of defense and foreign ministers in the counter-IS coalition. They are expected to talk about the coordination of political and military efforts, including counter-terrorist financing, combating the flow of foreign fighters, and the stabilization of cities and towns that have been freed from Islamic State control.

“We are succeeding on the ground in Iraq and Syria but we have a lot of work to do,” said Brett McGurk, the president’s special representative to the counter-ISIL coalition. “This is an enormous challenge that will be with us for years to come.”

He told reporters that the situation in Libya and a rise in the number of foreign fighters there will be one major focus of the meeting on Thursday.

“Libya is incredibly complicated to say the least,” he said, noting that until six months ago the country was without a functioning central government. “We have some momentum, the discussion will be how to build on this momentum.”

The gathering comes on the heels of the NATO summit in Warsaw earlier this month, when allies agreed to boost support for the anti-Islamic State mission. NATO agreed to start a training and capacity-building mission for Iraqi armed forces in Iraq, and the allies agreed in principle that alliance surveillance aircraft would be able to provide direct support to the U.S.-led coalition fighting IS in Syria and Iraq.

The alliance will also begin flights by AWACS surveillance planes this fall and will set up an intelligence center in Tunisia, a major recruiting ground for ISIS.

A Year Later, Iran Nuclear Deal Is Holding but Fragile

The U.S. has announced that it will send 560 additional troops to Iraq, to transform a newly retaken air base into a staging hub for the long-awaited battle to recapture Mosul from Islamic State militants. The new American forces should arrive in the coming days and weeks.

Most of the engineers, logistics personnel, security and communications forces will concentrate on building up the Qayara air base, about 40 kilometers south of Mosul.

The extremist group captured Mosul in the summer of 2014. It is the second largest city in Iraq, and has been used as the group’s main headquarters since.

The coalition is also looking to reinforce the fight in Syria, where U.S.-backed forces are in a tough fight for the town of Manbij.

Manbij lies on a key supply line from Turkey to the ISIS’s de facto capital of Raqqa. Ousting the militants from Raqqa is a key goal for the coalition.