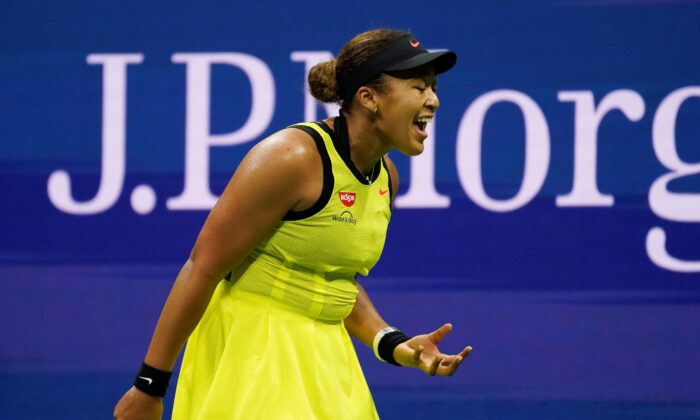 Naomi Osaka, of Japan, reacts during a match against Leylah Fernandez, of Canada, at the third round of the U.S. Open tennis championships, N.Y., on Sept. 3, 2021. (John Minchillo/AP Photo)
Tennis

Two-time U.S. Open champion Naomi Osaka announced following her defeat at the tennis competition on Friday she plans to take a break from the sport.

“This is very hard to articulate,” she said at a press briefing, resting her left cheek in her hand. “Basically, I feel like I’m kind of at this point where I’m trying to figure out what I want to do, and I honestly don’t know when I’m going to play my next tennis match.”

“I think I’m going to take a break from playing for a while,” she added.

Osaka lost, 7–5, 6–7 (2), 4–6, in the third round at the U.S. Open Friday night at Arthur Ashe Stadium in Flushing, New York to 18-year-old Leylah Fernandez from Canada, who is ranked 73rd and never had been this far in Grand Slam competition.

A STUNNER IN ASHE!

“I feel like for me, recently, when I win, I don’t feel happy, I feel more like a relief. And then when I lose, I feel very sad,” Osaka said, pausing every so often as she broke down in tears.

Osaka owns four Grand Slam titles, including at the U.S. Open in 2018—beating Serena Williams in a chaotic final—and a year ago, plus two more on the hard courts of the Australian Open.

The 23-year-old U.S. Open defending champion disclosed earlier this year after she pulled out of the French Open that she’s battling depression. Most recently, she also sat out the Wimbledon tennis tournament and was knocked out in the third round of the Tokyo Olympics.

Over the last week, Osaka has written on social media and spoken about her thoughts on the importance of self-belief and how she wants to ignore others’ expectations.

Known for her calm and introverted character, a first sign that things were not fine with Osaka came when she threw her racket down in frustration. She then left the court between sets with a towel over her head.

“I was telling myself to be calm, but I feel like maybe there was a boiling point,” Osaka said. “Like, normally, I feel like I like challenges. But recently I feel very anxious when things don’t go my way, and I feel like you can feel that.”

“But, yeah, it’s basically why. You could kind of see that. I was kind of like a little kid,” she added.

Friday was a breakthrough performance for Fernandez, marking her first win over a top-ranked world player just a few days before her 19th birthday. Her next match will be on Sept. 5 against Angelique Kerber of Germany, a winner of three Grand Slam tournaments.

“I’m going to put on a show like I did tonight,” Fernandez told reporters during her own on-court interview. “We’re going to see how it goes.”

Fernandez said she was confident in the game against Osaka and knew she had a chance to win, adding that she “wasn’t focusing on Naomi” but only on herself and what she needed to do.

“From the very beginning, right before the match … I knew I was able to win,” she said.