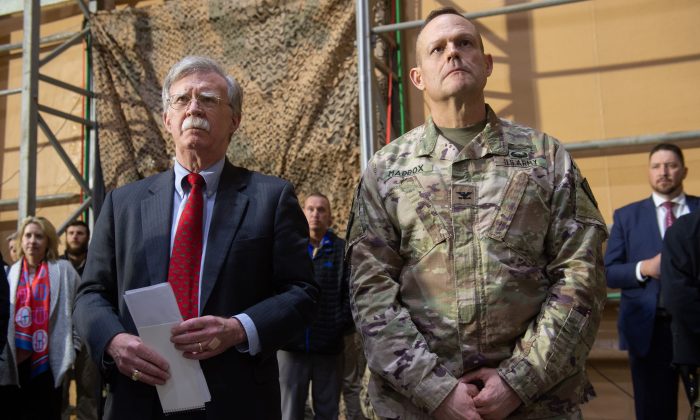 National security adviser John Bolton (L) listens as President Donald Trump speaks to members of the military during a trip to Al Asad Air Base in Iraq, on Dec. 26, 2018. (Saul Loeb/AFP/Getty Images)
Viewpoints

Could democratic coups work in Moscow and Beijing?

Dictators in China, Russia, Burma (Myanmar), and Ethiopia are today conducting genocide. Others in North Korea, Iran, and Venezuela add to the millions of deaths, arbitrary detentions, torture victims, and refugees.

They use force daily to stay in power and, thus, can only normally be removed by force. Sometimes with a helping hand from outside.

But isolationists in the United States have forgotten their history. And they either don’t care much about democracy and human rights abroad, they don’t understand that letting dictators run rampant means the horror could eventually reach American soil, or they mistake wars of defense for wars of aggression.

One of the least costly and most beneficial ways to overthrow the worst of dictators is through a bloodless democratic coup, in which the military gently removes a dictator from power, rapidly transitioning the country to democracy. These dictators can be offered millions of dollars to walk away peacefully into the south of France or to a Swiss chalet retirement.

Americans (and dictators) should all support that kind of coup. The United States is one of the only countries capable of pulling it off, as it requires extensive planning, resources, logistics, and contacts in the autocracy needing help.

Yet when former national security adviser John Bolton (2018–2019) said as much on July 12, mentioned off-handedly that he had planned such coups, and cited the example of Venezuela, the shock of his CNN interlocutor was palpable. The public reaction was swift, not only by the usual suspects in China and Russia, but by left-leaning mainstream media right here in the United States.

A “reporter” for The Washington Post, for example, quoted a cast of authoritarians, including from the three countries mentioned above, but found nobody to make the opposing argument. Even Fox News and The Wall Street Journal failed to defend Bolton.

Democratic coups have occurred multiple times in history, as detailed by law professor Ozan O. Varol in the peer-reviewed Harvard International Law Journal in 2012 and Oxford University Press in 2017.

In some contexts, argues Varol, a democratic coup is preferable to other forms of democratization.

“Military intervention may be the only available option to shepherd a nation through the tumultuous transition process to democracy because other methods of democratization have been blocked by the authoritarian or totalitarian regime,” Varol writes in the journal.

That sounds a lot like China and Russia today. But Varol went further back in history.

“For example, in Portugal in 1974, the authoritarian government ensured that the popular opposition against the regime remained too disorganized, socially and politically, to take the primary role in deposing the government, which prompted the Portuguese military to stage a coup to topple the government and replace it with a democratic regime,” he writes.

The coup in Portugal against a right-wing dictator by leftist military officers admittedly almost led to disaster: the consolidation of a second dictatorship by the country’s Communist Party.

Thankfully, that didn’t occur. According to Cullen Nutt, a professor at the U.S. Naval Academy, America saved the day. (I’m not being ironic.)

Ambassador Frank Carlucci and the CIA encouraged moderate Portuguese officers, including with the promise of clandestine provision of arms, to force an election. The United States funded the Portuguese Socialist Party with, at minimum, hundreds of thousands of dollars in clandestine campaign donations, and it beat the Portuguese Communist Party. As a result, Portugal stayed in NATO as a democracy. It dodged the bullet of dictatorship.

Other examples of democratic coups, analyzed by Varol, include those in 1960 in Turkey and 2011 in Egypt. Both resulted in elections and democracy in Turkey longer than in Egypt.

Democratic coups aren’t failsafe, and the United States shouldn’t fund candidates in mature democracies. But one has to wonder how much human suffering might have been averted if coups were launched against Lenin in 1917, Hitler in 1938, or Mao in 1949.

Lacking that, we yet again face nuclear-armed and aggressive dictators in Moscow and Beijing who have “no limits” to their global ambitions. Their power and reach today are a direct result of World War II and are highly destructive.

While it was perhaps a mistake in optics for Bolton to “admit” to planning coups, and the more facile mainstream media too easily deride and dismiss him, they do so from an ahistorical and arguably amoral perspective.

If some brave and resourceful officers, supported by the United States or European Union, were to manage a democratic coup in Moscow or Beijing now, we might all be the better for it. Therefore, the possibility and Bolton’s “neoconservative interventionism,” as The Washington Post put it, should be taken more seriously.