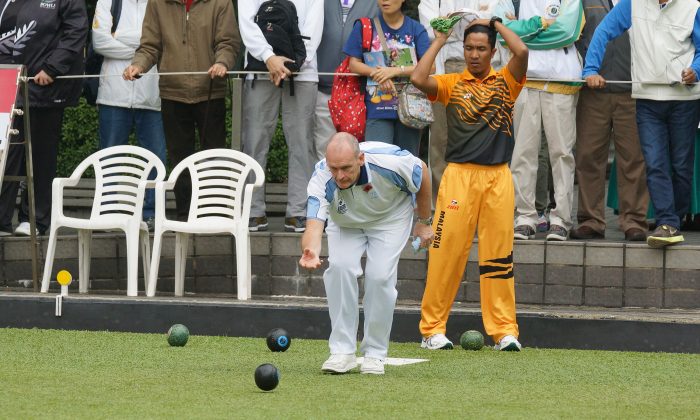 Scottish bowler Robert Grant (front) draw for victory in the final of the men’s singles final of the Hong Kong International Bowls Classic last Sunday, Nov 9, 2014, when his opponent Muhammad Hizlee from Malaysia regrets about a missed opportunity. (Mike Worth)
HK Lawn Bowls

Weather played a big part in the progress of the competition, which was sponsored by Craigengower Cricket Club to celebrate its 120th anniversary.

In the first day of the Singles competition on Saturday, a downpour in the early morning made the greens at Hong Kong Football Club and Indian Recreation Club barely playable, forcing the men’s competition to switch to the indoor greens at HKFC and Club de Recreio.

Grant despatched three local bowlers in the earlier rounds and met Richard Girvan from New Zealand in the quarter-finals. After losing the first set, Grant came back strongly in the second set and the tie-breaker to progress to the semi-finals.

He then saw off Malaysian bowler Fairul Izwan with ease in the semi-final to face another Malaysian Muhammad Hizlee in the final.

Grant had a slow start in the final, losing 0:8 after just three ends in the first set. “I always have a bad start but I know I will come stronger at the end,” he said. The result proved him correct as he took 10 shots from the remaining six ends to take the set.

The same phenomenon happened in the second, but this time there was no time left for him to recover. Grant was 0:10 down after six ends, “I was absolutely hammered. I just said to myself, the second set was gone, let’s go directly into the tie-breaker.”

“For the tie-breaker, you know it is your last chance, you have got to toughen up and play better” and he stood by his words wining a shot each from the first two ends. In the last end Hizlee was able to pull one back, but it was not enough to stop Grant from lifting his first Singles trophy at the Classic.

“I am absolutely delighted and am very fortunate to win today. The green is quite heavy and is not bending a lot so you have got to be aggressive and attack every head. I don’t think I played to my best, but I squeeze through at the end,” said a joyful Grant.