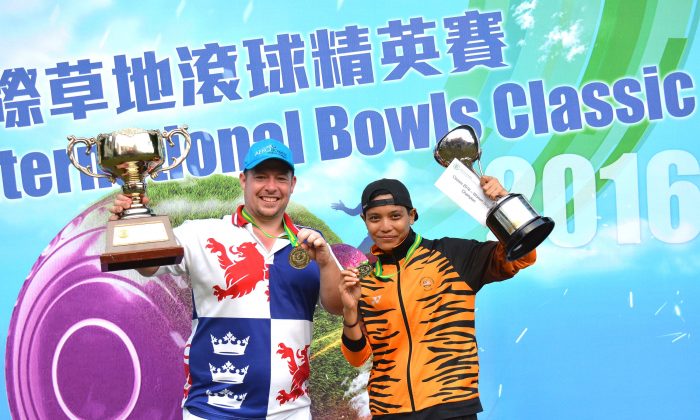 Hong Kong International Yu, who won the first ever women’s Classic Singles for Hong Kong last year, started well in her defending journey.  She defeated Michelle Chung from Wahhar Institute of Sports in the first round, and overcame 2014 Classic Pairs champion Sonia Bruce from Philippines and 2016 Asian Championship gold medalist Noorazlinda Zakaria from Malaysia in the following two rounds.

She followed up with wins against local players Queenie Lai and Angela Chau to progress to the final against Malaysian Zuraini Khalid, a silver medalist at the 2010 Commonwealth Games.

In the first set Yu struggled with the pace of the green and lost by a big margin of 14:1.  In the second set Khalid lost a little concentration and Yu pull one back with the score of 10:3.

In the extra set of three ends it was all Khalid as she displayed the consistency required for crucial moments.  Yu tried hard to focus on drawing but it was not enough for her to overturn deficit. The end finished 4:0 and Khalid became the third Malaysian lady to win the title.

Despite her lost in the final, Yu is still happy with the results, “Getting to the final has achieved my target so I am satisfied with my performance.”

Yu believed that she should have been doing better in the final though, “I was slow in adapting to the green’s condition in the first set but managed to come back in the second set.  In the tie-breaker I should have taken some of the chances but my opponent is very consistence so she won.”

Khalid was very happy to win the singles title in her first Classic appearance, “There were good players and tough games during the course of the competition.  I just played my normal game and focused on what I can do.  By this I kept my consistence and luckily got the result as well.”

In the men’s singles, defending champion Jordi Lo was eliminated by Australian Nathan Pedersen, who won the pairs last year, in the third round.  Pedersen lost to Welshman David Wyn Kingdon in the following round and the latter then beat Andrew Kyle from Ireland to enter the final.

In the other half David Bolt from England defeated a number of strong players to face Kingdon in the final.

The match started evenly with each player winning a set.  In the extra set both players displayed a highly skillful drawing technique and Bolt was winning 2:1 after the first two ends. In the third end Bolt had drawn a close shot and Kingdon played heavily to push the jack away to hold one.  Bolt then delivered his last bowls, “wicked” on of his own bowl and touched the jack.  Kingdon tried to run it but missed and the set finished 3:1.

Bolt was delighted to win the title in his first visit to Asia, “It is my first time here and it has been fantastic. I wasn’t sure what to expect with the greens condition but I always thought if I played the way I was then I will have as good chance as anyone.  To be honest I would not come over here if I thought I did not have a chance of winning and justify my selection.

“This is the best moment of my bowling career so far,” said a satisfied Bolt.

The pairs competition continues at Craigengower Cricket Club, Hong Kong Football Club and Indian Recreation Club this week, with the finals at CCC this Sunday.

The finals will be broadcasted live on YouTube. Bowlers around the world may visit http://www.hklba.org/live to enjoy the finals.

Details of the fixtures can be found on the Hong Kong Lawn Bowls Association website www.hklba.org.